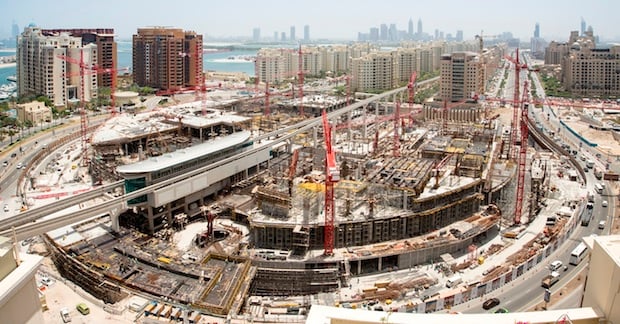 Despite a tough sales environment and falling oil prices, the UAE and Saudi Arabia have maintained their positions in the top 10 rankings for new retail development in 2016, according to consulting firm A.T. Kearney.

This,alongside reduced tourism in Dubai, mean the country is “not quite the dynamo retail market it has been in recent years”, according to the firm.

It cited the redesign of the planned Mall of the World in Dubai as the new economic reality in the country.

“The mall will no longer be the world’s largest, but will instead be split into three separate malls that will be built at different times as demand and funding dictates.”

However, it said the highest sales per capita in the region at $7,159, meant the country “remains an attractive and relatively low-risk market option for retailers”.

More broadly across the MENA region, the report indicated that foreign investors were “becoming a little more reluctant about adding stores”, with very few new brands having entered or expressing interest to enter the market.

Elsewhere, Saudi Arabia, in eighth place, saw retail sales grow by 5 per cent last year despite a15 per cent GDP contradiction due to falling oil prices. Retail sales were estimated at $109bn “thanks largely to favourable demographic conditions,” according to the report.

The firm said the kingdom’s young population meant there was high “demand for housing, which in turn is powering spending in furniture, white goods, and children’s products”.

It also highlighted a recent policy change in Saudi Arabia, allowing single brand retailers 100 foreign ownership in retail and wholesale, that could secure Saudi’s position as an international hub for distributing, selling and re-exporting products.

“While the speed of implementation remains in question, when put in place it should be popular with multinationals that are seeking the opportunity to manufacture locally,” it said.

Globally, the GRDI was led by China, followed by India, Malaysia, Kazakhstan and Indonesia.