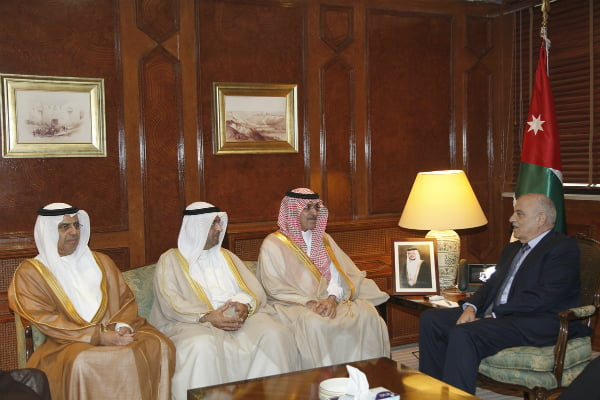 The UAE confirmed on Thursday it would provide Dhs3bn ($833m) of aid to Jordan following a commitment earlier this year.

The emirates, Kuwait and Saudi Arabia pledged $2.5bn in support to Jordan in June after protests against austerity measures rocked the country.

They confirmed their respective contributions during a meeting today in Amman attended by the finance ministers of Kuwait, Saudi Arabia and the UAE.

The UAE said it would provide a $333.3m deposit in Jordan’s central bank, $250m to support Jordan’s budget over five years, a $50m loan for development projects and $200m in guarantees to the World Bank.

The package will be managed by the Abu Dhabi Fund for Development, which has provided financing for Dhs5.6bn ($1.52bn) of projects in Jordan to date, according to the announcement.

Saudi Arabia’s finance minister Mohammed Al-Jadaan said separately that the total aid provided by the three countries would include $1bn for the central bank, $600m in World bank guarantees and annual support of $150m over five years.

UAE minister of state for financial affairs Obaid bin Humaid Al Tayer “reiterated that via the economic aid package, the UAE will seek to stimulate the economic and financial landscape in Jordan and contribute to supporting the country’s development plans”, according to the statement.

“More specifically, it will facilitate the Jordanian government in implementing its priority infrastructure projects in key sectors.”