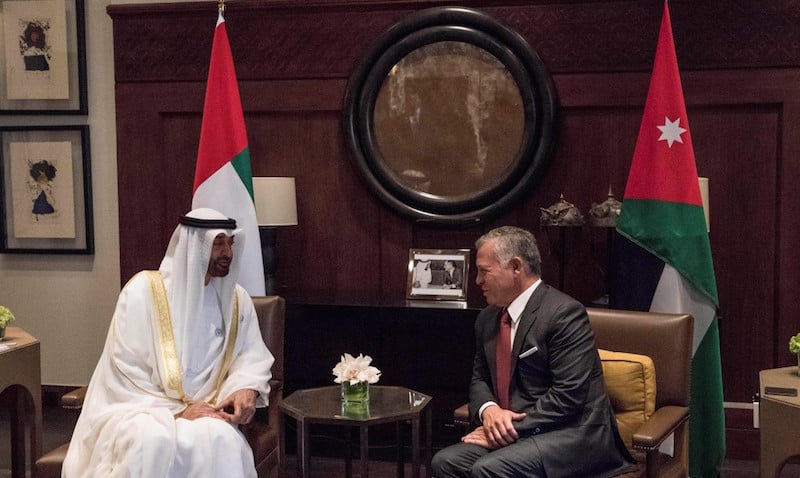 The UAE has signed an agreement worth $100m with Jordan to finance entrepreneurs and small and medium-sized enterprises (SMEs) in the hashemite kingdom.

The agreement was signed on Wednesday during a visit by Abu Dhabi Crown Prince Sheikh Mohamed bin Zayed Al Nahyan to Jordan.

Set to be implemented by the Khalifa Fund for Enterprise Development and Jordan’s Crown Prince Foundation, the agreement is aimed at supporting entrepreneurship and ensure a “stable and balanced economy” in the kingdom, official news agency WAM reported.

The fund will target financing around 22,000 projects over five years and aims to create around 28,000 job opportunities for Jordanian youth.

Hussain Jasim Al Nowais, chairman of Khalifa Fund for Enterprise Development, said: “The agreement reflects the depth of relation between the two countries. It aims to strengthen cooperation with regional and international institutions that support entrepreneurship and SMEs.

“We affirm our keenness to establish strong relations with the various regional economic and social institutions in order to support the local economy and promote trade between the UAE and Jordan.”

Under the agreement, both the countries will seek to develop entrepreneurship in line with their respective national strategies, taking into account the national regulations and policies in the UAE and Jordan.

They will implement major programmes and special initiatives to support the growth of microfinance and SMEs, with a special focus on women, youth and people from disadvantaged areas.

Fawaz al-Zu’bi, president of the Jordan Crown Prince Foundation’s board of trustees said: “Our partnership with Khalifa Fund will support the Jordanian youth in general, and those belonging to disadvantaged areas in particular. We will prioritise supporting SMEs and microenterprises as they complement many of our projects and play a great role in promoting the overall economic development process in Jordan.

“Through this partnership, we aim to strengthen the role of the youth in leading this development process,” he added.

Last month, the UAE also confirmed that it would provide Dhs3bn ($833m) of aid to Jordan following a commitment earlier this year.

The Emirates, Kuwait and Saudi Arabia pledged $2.5bn in support to Jordan in June after protests against austerity measures rocked the country.