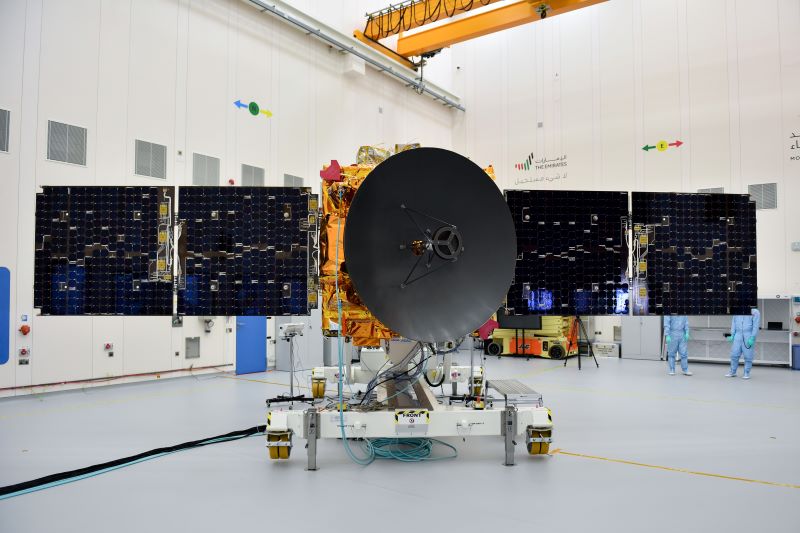 The UAE Space Agency and the Mohammed Bin Rashid Space Centre (MBRSC) confirmed the completion of the Hope probe’s transfer to its launch site at the space station on Tanegashima Island in Japan, despite the Covid-19 related challenges.

The transfer of the probe from the Mohammed Bin Rashid Space Center to Al Maktoum International Airport took 12 hours via a special truck that included sensitive scientific equipment.

Meanwhile, the world’s largest cargo plane transported the Hope probe from Dubai to Japan on an 11-hour journey. The team also monitored the intensity of the air bumps where severe vibrations would affect the structure of the probe. The team accompanying the probe delivered it to the team in Japan upon arrival at Nagoya Airport.

Finally, the probe took over 44 hours over land and sea from its arrival at Nagoya Airport in Japan to the departure station on Tanegashima Island.

We proudly announce the successful transfer of the first Regional Mars probe from the Mohammed bin Rashid Space Center in Dubai to the launch site on Tanegashima island in Japan, in an 83-hour operation under the supervision of a team of Emirati engineers. pic.twitter.com/06D5r0xDim

Dr. Ahmed bin Abdullah Hamid Belhoul Al Falasi, Minister of State for Higher Education and Advanced Skills and chairman of the UAE Space Agency said: “We would like to take this opportunity to extend our highest gratitude and appreciation to the wise leadership of the UAE for their continuous and unlimited support on this project to explore Mars and the national team of young women and men dedicated to this project.”

Sara Al Amiri, Minister of State for Advanced Sciences, Deputy Project Manager of EMM, pointed out that the Emirates Mars Mission is part of the UAE’s accelerated developmental journey to further establish itself as a leader in space science and exploration.

“Today, we must celebrate the scientific achievement of our engineers, scientists and technicians. This milestone will become an integral part of the UAE’s history that we collectively take pride in. This project will become the largest scientific addition to the Arab World’s notable achievements in the space and sciences industry,” she added.

The Hope probe is a national project that reflects the UAE’s vision to build an Emirati space program, to strengthen international cooperation and partnership with a view to finding solutions to global challenges. The Hope probe’s mission to Mars will start in mid-July 2020 from the Tanegashima Space Center using the Mitsubishi Heavy Industries (MHI H2A) platform and is expected to reach the Red Planet’s orbit in the first quarter (February) of the year 2021.