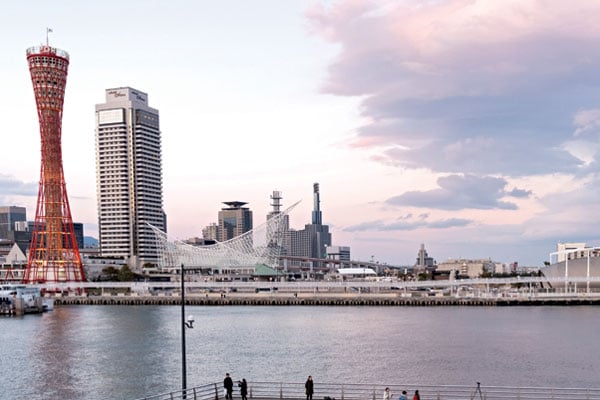 In 1868, after more than two centuries of isolationism, the opening of the port of Kobe brought a wave of international influences to this sunny city on the main Japanese island of Honshu.

These days, visitors will find Western-style mansions built by foreign diplomats, music influenced by the United States, and dim sum in the city’s Chinatown district. But the main attractions remain rooted in the region. Kobe is the western neighbour of more well-trafficked tourist destinations — Kyoto is less than a half-hour away on the Shinkansen bullet train; Osaka is just 15 minutes.

Although the city is best known for its beef, those who linger in this welcoming, walkable metropolis will also discover a singular music scene, memorable museums, eclectic shopping, little-known regional specialties and an easygoing atmosphere tinged with the foreign flavors that continue to flow through the city’s glittering harbour.

3pm: Tools of the trade

Don’t let the name of the Takenaka Carpentry Tools Museum fool you — even those who can’t tell a Phillips Head from a Torx will be riveted by the exhibits presented inside this beautiful museum, just steps from Shin-Kobe station.

A superb iPod audio guide (free) narrates the history, traditions, artistry and craftsmanship of Japanese architecture and woodworking, so allow a couple of hours to explore everything from the ceremonial duties of a master carpenter and the joint beams of centuries-old temples to the harmonious beauty of intricate kumiko zaiku wood latticework. Admission, 500 Japanese yen (about $4.50).

Exit Shin-Kobe station and you’ll face an urban milieu, but right behind the station, nature takes over. Curl north around the station, which abuts forested foothills, and follow the steep, shady path into the woods where, after about a half-mile, you’ll reach Nunobiki Falls, a series of majestic cascading waterfalls well worth the ascent.

Brush up on your Japanese before sidling up to the counter at Rakuzake, a cheerful standing bar that opened last April in a downtown shopping arcade. This local hangout, with blonde-wood counters and colorful flower arrangements, serves small plates to be paired with drinks, namely nihonshu (sake). Order several dishes — thick slices of salmon and tuna sashimi, maybe some chilled tofu, plus a plate of piping-hot fried octopus. On the second round, don’t miss the standout karaage (fried chicken), served with fresh cabbage and a dollop of Kewpie mayo. Dinner for two, about 3,000 yen.

Thanks to foreign influences, Kobe has long had an ear for jazz. The city hosts an annual jazz festival, and nightly live shows are staged in hushed clubs around town, including the atmospheric Sone. For a taste of the music scene without the hefty admission fee, descend a flight of stairs to Jam Jam. A coffee shop by day and a jazz cafe by night, this welcoming music den has a vast vinyl library of new wave and classic jazz from around the world, plus a separate seating for conversation and for listening.

If there’s time to visit only one art museum in Kobe, go for the Yokoo Tadanori Museum of Contemporary Art. Opened in 2012, this museum showcases the wide-ranging works of Yokoo Tadanori, a graphic designer-turned-painter and Hyogo Prefecture native. In addition to psychedelic Warholian silk-screens from the 1960s, for which Tadanori is best known, the galleries also exhibit his more recent paintings. Admission, 700 yen.

Gyoza are typically served with a thin soy-and-vinegar sauce, sometimes spiked with chili oil. But in Kobe, the preferred dipping condiment for these sizzling pan-fried dumplings is an umami-rich miso sauce. Stop for a snack at Hyotan, a gyoza specialist since the 1950s with eight seats along a cramped counter. Once you’ve shoehorned yourself onto a stool, ordering is easy: The only thing on the menu is gyoza, seven per order (390 yen). In addition to pots of miso sauce, there are also bottles of garlic oil, vinegar, soy sauce and chili oil on the counter for a mix-your-own condiment adventure.

Underneath the train tracks between Motomachi and Kobe stations stretches a peculiar shopping arcade where you can unearth vintage vinyl and the missing controller to your old Nintendo. Stroll through Motoko Town, as the aging arcade is called, to poke around bric-a-brac shops filled floor-to-ceiling with 20th-century computers, kitschy belt buckles or, military uniforms from the US and Germany. You’ll also pass excellent vintage shops, record stores, small art galleries, a silversmith and local designers screen-printing T-shirts.

Near Kobe Station, the arcade devolves into a ghost town, with only the occasional open stall peddling 20th-century, Showa-era toys and boxes of old remote controls; better to start at Motomachi and walk southwest.

Kobe beef is what many come here for, and you can find it served a variety of ways throughout the city, at street food stalls and specialty restaurants like Ishidaya. But if you prefer lighter fare, head to Hanare, an intimate, eight-seat hideaway specialising in sumibiyaki, or cooking over charcoal. Start with sake and sashimi; in lieu of an English menu, the chef will pull out the day’s fish for you to choose. For adventurous diners, this is the place to try torisashi, chicken sashimi. Add to that a few skewers of yakitori — momo (thigh), hatsu (heart), kawa (skin) — and the house specialty: a beautifully arranged garden of charcoal-roasted vegetables. Dinner for two, about 9,000 yen.

Glide high above the treetops aboard the Shin-Kobe Ropeway, a gondola that whisks passengers up a steep mountain slope to an observation deck with expansive views of the urban sprawl (1,500 yen round-trip). After admiring the panorama, which on clear days extends to the Seto Inland Sea, you can head deeper into the forest on a mountain hike or wander leisurely downhill through the Nunobiki Herb Gardens, where seasonal flora ranges from tulips and nasturtium in spring to summer sunflowers and lilies to the fiery leaves of autumn.

On a quiet lane behind Ikuta Shrine, stop at Beyond Coffee Roasters, an excellent micro-roastery in a tiny house with a new stand-alone coffee shop across the street. Opened last year, the cute little shop, with a herringbone-wood counter and paint-smeared walls, is standing room only, so if it’s busy, take an espresso with tonic water to go.

Otherwise, wait patiently for a pour-over, which might be prepared by Bunn, the mustachioed roaster whose signature handlebar inspired the shop’s logo.

On January 17, 1995, at 5.46am, Kobe and the surrounding area were devastated by a massive earthquake that left more than 6,000 dead and nearly a quarter of a million homes destroyed. To understand the trauma overcome by this city, visit the Great Hanshin-Awaji Earthquake Memorial, a moving museum dedicated to preserving the memories of this disaster, and educating the public on how to prepare for and act if faced with a future natural threat. Despite the potentially frightening subject matter, this engaging, educational museum is routinely packed with local schoolchildren. However, those with vertigo or acute natural-disaster anxiety may prefer to skip the introductory exhibit: a powerful earthquake re-enactment involving shaking video and booming surround sound. Admission, 600 yen.