Indian-origin Sudesh Aggarwal is a veteran businessman in the UAE. His biggest venture to date remains GRP Industries which he set up in the country back in 1988. He also established the first manufacturing facility for polyester enclosures in the MENA region back in the 1980s and has since then bagged several lucrative contracts with governments across the region, from the UAE and Oman to Saudi Arabia and Qatar. His diverse portfolio of investments spans real estate, food production, video gaming and home furnishings. But he’s now trained his sights on sports – specifically golf.

Aggarwal has been as familiar a face on the business circuit as he has been on the golfing one here in Dubai. “I started playing golf about 27 years ago when I became a founder member of Dubai Creek Golf & Yacht Club. I have won all kinds of club tournaments and Corporate Golf Days. I have also been the founding chairman of the Indian Golfers Society for 15 years,” says the golfer with a current index handicap of 14.

On January 20, Aggarwal launched the Emirates Amateur Golf League – the world’s first franchise-based amateur golf league. Based out of the UAE, the league is backed by the Emirates Golf Federation as well as the Asia Pacific Golf Confederation (APGC).

The inaugural season of the EAGL, which is modelled on the rapid-fire IPL cricket format, will run from November to January. It will feature eight franchises in the first season on a first-purchased, first-served basis. The franchises up for sale are: Abu Dhabi Roars, Asian Jumbos, Dubai Tigers, Emirates Players, English Nicks, European Seves, Indian Singhs, Korean Chois and Pakistani Taimur.
The squad places are open to both men and women players, though all members of a team will have to play from the same tees.

Elaborating on the format, Aggarwal says that each franchise will consist of a pool of 24 players captained by two professional, non-playing coaches/captains. Each team will play one another in a round-robin – with 12 players selected for each match – before the semifinals leading to a grand final. The plan, he says, is for captains to be drawn from among UAE PGA members. The professionals will be coaches and act like captains. There will also be non-playing captains.

To participate, amateurs have to register online. This shall be checked by the franchiser and once approved, they will be included in a player pool. They will then have to sign a contract and pay the registration fee. Teams will have to choose players only from the players’ pool. They’ll have the choice to take two players of each group, with the rest selected by a draw. This mechanism is being worked out at the moment, Aggarwal says, to be fair to all team owners and safeguard the interests of the players as well. There will be four groups: 0-4, 5-8, 9-11 and 12-14 handicaps, with matches between each group’s players.

As for the visibility that this competition seeks to achieve, Aggarwal is still working on a deal with a network, but has promised 40 hours of live coverage online across EAGL’s social media networks in the first season as well as sponsorship, PR and networking opportunities for franchisees. Given the APGC’s backing, it is a format that could gain visibility in all 42 countries that the APGC represents. 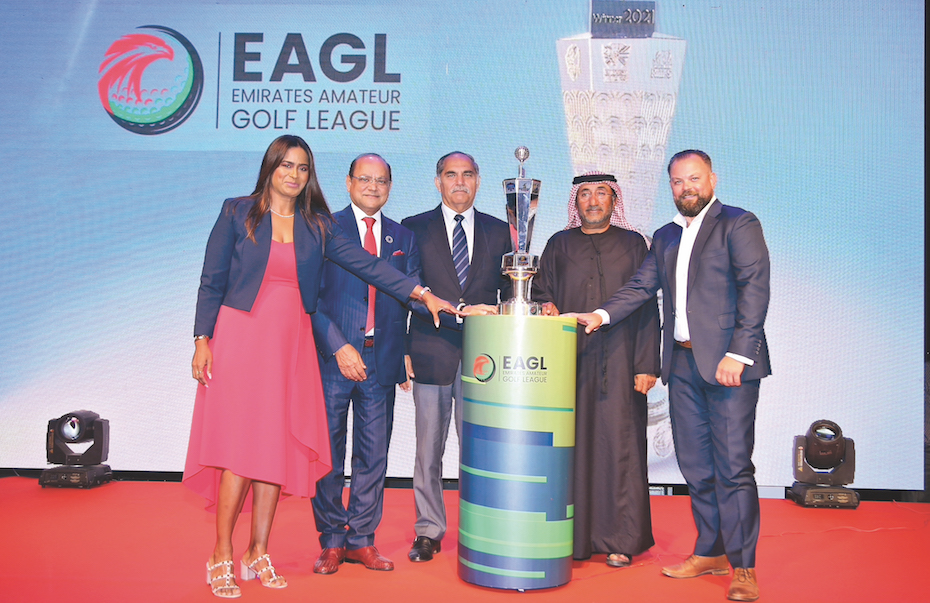 “The EAGL, for sure, will be a very cost-effective and value-added proposition over the corporate golf days. It means nine golf days, plus launch and closing parties, and invitations. We estimate that the EAGL will give access to at least 6,000 well-to-do people in the society directly, apart from the media and live broadcast exposure,” says Aggarwal.

Aggarwal is in the midst of finalising sponsors for the event. The cost of sponsoring one of the nine franchises, although not revealed, is believed to be in the six-figure bracket. “We anticipate a very healthy return on investment. There shall be a cash return from the franchiser sharing the sponsorship fee with the team owners and an opportunity for team owners to have their own team sponsors. Returns in marketing, branding, promotions, live broadcast, media coverage, developing and entertaining clients, PR etc. shall be manifold. Appreciation in teams’ valuation is another aspect.

Above all, the pride of owning a sports team is an immense value addition,” says Aggarwal. He adds that initially, when the idea of promoting sports first came up, he considered cricket instead of golf. “We were to do a cricket league, but then realised it is a very saturated market and something new had to be created.

“I am a very keen amateur golfer and there is nothing exciting happening for players like us other than corporate golf days and club tournaments, so I came up with the idea to do the league for amateur golfers in the same style as leagues in other sports. A league in amateur sport is going to be very challenging, but I am sure we will overcome those challenges.”

That challenge will unfold this November, starting at the Dubai Creek Golf & Yacht Club.