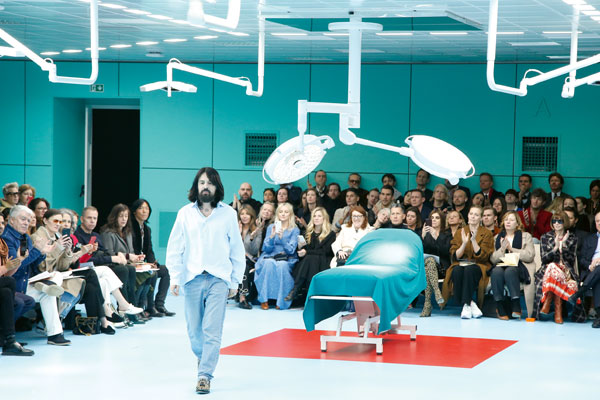 Creative directors are rabble-rousers. They’re brought in with a specific mission to disrupt, innovate, deliver commercial success and attract critical acclaim all in the space of a single season.

Little wonder then that there’s a high burnout rate among them too: Brioni’s tattooed-to-the-knuckle former creative director Justin O’Shea is an example of what happens when they get it wrong.

But Gucci’s creative director Alessandro Michele, who took up the baton from Frida Giannini three years ago, needn’t worry. From gender fluidity to kangaroo fur-lined shoes and inspirations drawn from objects as esoteric as a carpet, he’s not only making all the right noises, but he’s also injecting a much-needed vibrant elixir into the veins of the Italian fashion brand.

But every creative director that operates at the level that Michele does, knows that to really be successful in the long- run there needs to be brand enhancements beyond the runway. Getting Lady Gaga to wear custom Prada when singing the national anthem for a TV audience of over a 100 million people at the Super Bowl two years ago was a coup, but how does a brand sustain that momentum?

Michele knows the answer. Earlier this year, he threw open the doors to the Gucci Garden, constructed inside a 14th century structure in the historic Palazzo della Mercanzia in Florence. In many ways it was Michele reconnecting the brand – which was founded in the historic city back in 1921– with its roots, and in many more ways it was breaking new ground that will drive long- term sustainable growth for the brand.

Gucci Garden is Michele’s means of opening up the brand to the masses. Storied fashion labels are often, and many times justifiably, accused of snubbing the small guy. In a quest for exclusivity, these brands would rather focus all their attention on the 1 per cent that buy their products and completely deny the existence of the other 99 per cent. Not Michele and not Gucci. Gucci Garden is Michele’s way of making Gucci, and luxury fashion in general, less highfalutin, less intimidating and more accessible.

It starts with the pricing of the entry ticket to Gucci Garden. It’s capped at EUR8 ($10), with further discounts for students and people of determination.

Spread across six rooms on two floors, visitors can travel through the brand’s history from its roots in the 1920s as a manufacturer of luxury luggage to its current day avatar as a vanguard for all things fashion.

Michele teamed up with Maria Luisa Frisa to curate the gallery section located on the first and second floor of the three-storey structure. The objects in the rooms aren’t arranged chronologically, but thematically instead. The first room, for example, is called Guccification and celebrates the GG symbol and its representation as a work of pop art. Another room called Paraphernalia focuses on the brands iconic pieces like its loafers and horsebit. 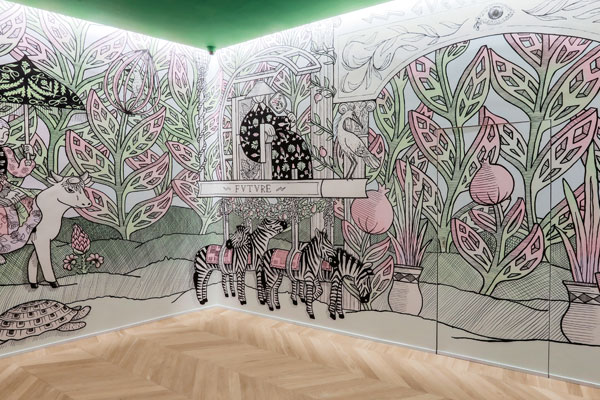 The Cosmorama room explores the brand’s genesis as a luxury luggage maker, while nearby you’ll find a 30-seater velvet lined auditorium in which experimental films will be showcased. The De Rerum Natura room on the second floor explores the brand’s relationship with flora and fauna and is an ode to Michele’s fascination with animals and gardens.

The sixth room, Ephemera, uses videos, documents and memorabilia to showcase milestone moments that turned Gucci into one of the world’s most recognisable luxury brands over the last nine decades.

Down on the ground floor, you’ll find Gucci Osteria, the luxury brand’s first-ever restaurant. Without making much of a fuss, and almost using the Gucci Garden concept as a smokescreen, Michele has cleverly diversified Gucci into an all-new territory of the culinary business. Done right, it could open a whole new revenue-spinning division for brand Gucci.

You can order a Gucci tortellini in parmesan sauce or a Gucci scampi too. While you might think that eating at a restaurant that combines a powerful Italian fashion label and a Michelin chef will lead you to max out your credit card, you’d be wrong. The most expensive item on the menu is priced at €30 ($37). Another masterstroke from Michele to ensure that Gucci is repositioned as accessible.

To see the ripple effects of Michele’s creative direction, you don’t necessarily need to look 6,000km away. In March this year, the brand opened a new 1,000-square-metre flagship store in Dubai Mall and a DIY service that allows customers to personalise their belts or sneakers. Again, it is encouraging self-expression, almost willing people to be co-creators in the brand and allowing them to feel they have a voice when it comes to the future of Gucci.

If the whispers among the fashion fraternity are anything to go by, Michele is merely getting warmed up. The Gucci Garden is just one example of his evolving vision for the brand. The longer he stays at the top – and there’s no sign that he’s letting go anytime soon – the more confidence he’ll have to break through nearly a century of tradition and shape a future for Gucci that respects its past, yet focuses on its future. The Gucci Garden is only the blueprint.