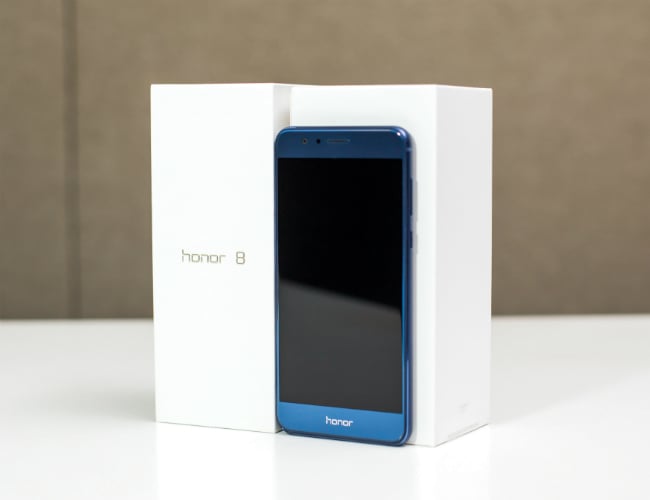 Amid the flurry of more budget-conscious smartphone brands to launch in the Gulf in recent years, Huawei’s Honor line has been one of the few to stand the test of time.

The brand, with its focus on good features at affordable prices, launched in the region last year with the Honor Six Plus and is now taking its next step with the sale of its latest device, the Honor 8, on its dedicated website.

As with the Honor 7 last year, on offer is a device that seeks to challenge the flagship smartphones of rivals without the price tag to match.

But to say this is just more of the same would not be doing Huawei credit.

There have been clear changes to the design language, with a new glass construction that offers a distinctive shimmer. Although arguably not quite as pleasant on the eyes as devices at the very top of the market, it certainly looks more premium than last year’s metallic offering, even if it is prone to fingerprint smudges.

In the hand, the device feels smooth and sleek and is also noticeably thinner than its predecessor, but the rear fingerprint scanner offers some familiarity. Over time this proved reliable for unlocking the device and as a bonus can now be clicked once or twice to open the camera or other apps, which is convenient for those moments when you want to quickly grab a photo.

From the front, much remains the same as last year with a 5.2-inch screen and 1920×1080 display. This offers crisp visuals and is claimed to be brighter and more colourful, but falls short of the quad-HD offerings seen elsewhere and is perhaps the phone’s biggest disparity with more expensive Android rivals.

Elsewhere though, there have been clear upgrades to the specifications with Huawei’s Kirin 950 processor instead of the 935 and 4GB of RAM rather than 3GB offering improved performance. In practice this means you are less likely to encounter slowdown while playing 3D games or engaging in some intensive multitasking than you were with the Honor 7, although most higher end smartphones rarely encounter stuttering these days.

On the storage front it’s much the same story with the base memory pushed up from 16GB in last year’s device to 32GB this year. Those with a significant music collection will also be pleased to hear this is expandable by up to 128GB through the SD card slot, although this does prevent dual-SIM use.

Perhaps the most significant upgrade though has been to the rear camera, which now boasts dual lenses. Despite a downgrade from 20MP to 12MP, this means far superior detail and colour in different lighting conditions and comparable shots to those seen on more expensive devices. The snapping speed is quick and the included pro and aperture modes mean you can tweak with the focus and visual settings for some more arty stills. On the front, the 8MP shooter offers pictures with not quite the same detail but it does come with a ‘perfect selfie’ mode to help beautify your shots. You can also use the rear fingerprint scanner as the camera button for added convenience. 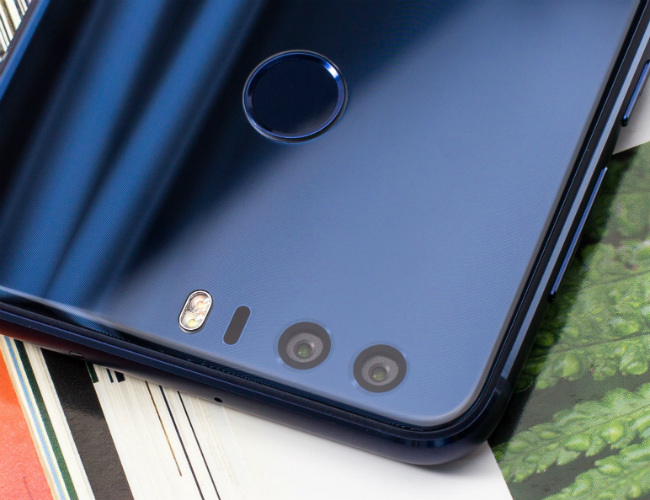 Moving on to the software, users will either be pleased or disappointed to hear that the Honor 8 uses Huawei’s Emotion UI on top of Android Marshmallow. This means, as has been mentioned in previous reviews, an interface that is more similar to Apple’s offering with no app tray but all of your installed applications displayed on the home screen. Love it or hate it, this is far from a deal breaker from my perspective but may annoy those that want a tidy home screen. Huawei has also promised two years of OS upgrades for Honor devices, meaning you should see future updates from Google.

One nice software addition is the included blue light filter, in theory meaning less eyestrain and a better night’s sleep if you find yourself using the device in bed. This is by no means reason to buy the device alone but certainly adds bang for your buck.

The new fast charging mode, allowing the smartphone to from 0 to 47 per cent battery in 30 minutes, is also a welcome addition. However, some may be disappointed by the switch to a USB type C charging socket, meaning your current charger collection will be useless without an adapter. The battery life itself is also by no means groundbreaking, lasting around a day and a half with moderate use, so you may want to purchase a second cable for the car or work.

So what’s the verdict?

Once again, Honor has delivered here with a competitive device at a lower price that is no slouch in the looks or features departments. For those wanting something capable but cheaper than Samsung or Apple’s flagship offerings the Honor 8 is certainly worth considering. However, do bear in mind that the display technology is not the latest or the greatest on the market right now.

The Honor 8 is available in the region from September 5, priced at Dhs 1,599