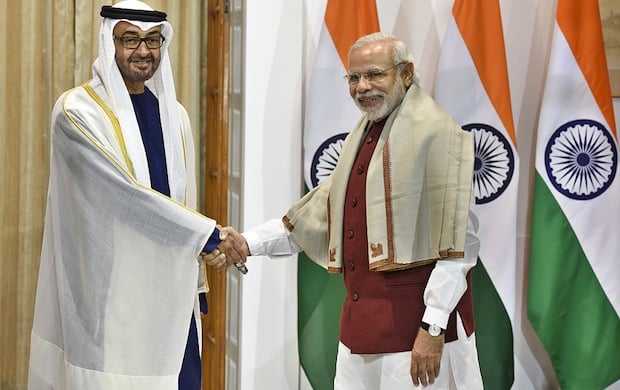 Sheikh Mohammed has been invited to be the chief guest for India’s Republic Day celebrations on January 26. He will be accompanied by a high-profile delegation including ministers, officials and businessmen.

A contingent from the UAE Armed Forces will also take part in the event, making it the first time that Arab soldiers are joining India’s Republic Day military parade.

The two countries are expected to discuss bilateral ties related to areas such as counter-terrorism, trade relations and investment.

Prior to the visit, foreign ministries from the two countries already held talks in India.

Setting the stage for an important visit. 1st #IndiaUAE Strategic Dialogue takes place in Delhi before visit of Crown Prince next week pic.twitter.com/NF5BFvwKKS

The UAE and India share strong economic ties – they are among each other’s top partners with bilateral trade reaching around $50bn between 2015 and 2016.

Following a visit by Modi to the UAE in 2015 – the first by an Indian PM in 34 years – the UAE and India set a target of boosting bilateral trade by 60 per cent in the next five years.

The UAE is also the largest Arab investor in India, with investment exceeding $10bn – representing 85 per cent of the total Arab investment in India. The UAE was also the sixth largest source of crude oil import for India in 2014-15.

The Emirates also has a massive resident Indian community – estimated at 2.6 million – who remit approximately $12bn each year.

Indians are also among the biggest buyers of real estate in the UAE – about 6,263 Indian investors made Dhs12bn worth of property transactions in Dubai last year, ranking the highest among international investors in terms of both volume and value.