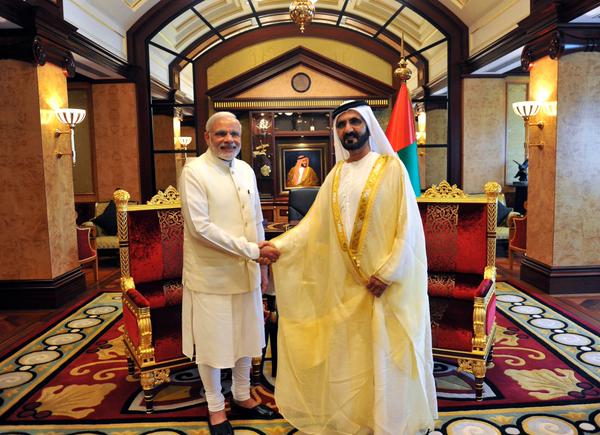 Given Indians are the largest expatriate community in the United Arab Emirates, numbering a whopping 2.6 million – up to 30 per cent of the overall country’s population – it was no surprise that the visit of the Indian Prime Minister in August was so widely anticipated.

Narendra Modi, the first Indian PM to visit the UAE in 34 years, met government officials and blue-collar Indian workers. He visited the Abu Dhabi Grand Mosque and Masdar City; and addressed a huge crowd of Indian expatriates during his two-day trip.

“We have a deep historical links and shared vision and aspirations for our nations,” he added.

In turn, Modi also took to Twitter: “India-UAE ties are set to grow at a historic pace. We discovered new areas to cooperate and I invited investors to see the changes in India,” he said.

In a joint statement following the visit, the two countries reiterated that they had embarked on a “new and comprehensive strategic partnership.”

“The Indian Prime Minister has astutely presented a picture of the UAE as an integral force in the development of the destiny of Asia,” says Kuwait Finance House (Markaz) senior vice president of research MR Raghu.

“This is a remarkable development as a result of the trip, as espoused by Narendra Modi’s words: ‘I can clearly see that the UAE should be at the centre of mainstream of things in Asia. [The] UAE’s power and India’s potential can make it Asia’s century’.”

“The trade and investment ties should pick up. The UAE’s decision to step up its investment in India including through the establishment of a UAE-India infrastructure investment fund – with the aim of reaching a target of $75bn – underscores that Modi is viewed as a credible interlocutor on the economic front.”

The new fund will be used to build railways, ports, roads and other projects in India, officials say. However, there were few details regarding how it will be financed and by when it will be in place.

India’s infrastructure deficit equals about $1 trillion, according to estimates and the country is keen to attract investment in areas including energy and real estate.

According to figures revealed by India’s External Affairs Ministry, the country received $3bn in foreign direct investment from the UAE last year.

“However, investments are likely to flow from the UAE into India only if there are significant improvements to the ease of doing business and better regulatory and taxation regimes. The memories of the pullout of Etisalat from India in 2012 are still recent,” says Raghu.

Despite this, Pant argues that Modi may bring the changes needed to convince investors: “I think after a long time there is a prime minister who is willing to look the foreign investors in the eye and say that there are bottlenecks indeed but he would be doing his best to eliminate them.”

“All the Indian businessmen living in the UAE want to be connected to our home country and I believe that the introduction of FDI – especially 100 per cent FDI in some industries – is going to attract a number of overseas Indians to invest in the country.”

Bilaterally, Indian investments in the UAE will continue to increase given the strong commercial ties between the two countries.

Indians are already the biggest spenders in Dubai’s real estate market, having invested up to Dhs 7.8bn in the sector during the first half of 2015.

“The UAE is bolstering its efforts to build a knowledge economy and to scale up its industrial base. These sectors could see greater Indian inputs. The traditional sectors of real estate, luxury hotels and retail chains and entertainment too exist,” explains Raghu.

In terms of bilateral trade, estimates suggest that volumes between India and the UAE reached $60bn in 2014. This made the UAE the third largest trading partner with India after China and the United States.

Following Modi’s visit, the two countries have set a further target of boosting bilateral trade by 60 per cent in the next five years.

One crucial sector that the two nations are focusing on is energy. A joint statement from the two governments said that the UAE would help India develop strategic petroleum reserves.

India’s oil demand has risen 300,000 barrels per day in the last year and the country is anticipated to overtake Japan to become the world’s third largest oil consumer this year.

Around 75 per cent of this oil is imported with about 40 per cent coming from the Gulf Cooperation Council countries.

“The UAE has a very important position in India’s crude oil dynamics, as the emirates is the sixth largest import source of crude oil for New Delhi,” says Raghu.

“For the GCC, too, India is now a key market, given the renewed emphasis on concentrating more on the markets in the east, like China and India, post the shale revolution in the US.”

As Raghu points out, India’s ties with the UAE and the wider GCC have largely remained in the economic and commercial domains.

“The UAE and India have so far not been able to greatly leverage the economic ties in the field of regional and global geopolitics. With India showing signs that it is moving away from the traditional non-alignment stance in terms of foreign policy, relationships with key countries like the UAE could yield political dividends on the global stage,” he says.

Signs of this were evident during the visit. Modi announced that the UAE is backing India’s bid to enter the United Nations Security Council as a permanent member.

In their joint statement, the two nations also hit out against terrorism and condemned efforts to use religion as a means to support and sponsor it.

They said they would enhance cooperation in counter-terrorism operations, intelligence sharing and defence capacity building. Dialogue between both nations’ national security councils and advisers are also planned.