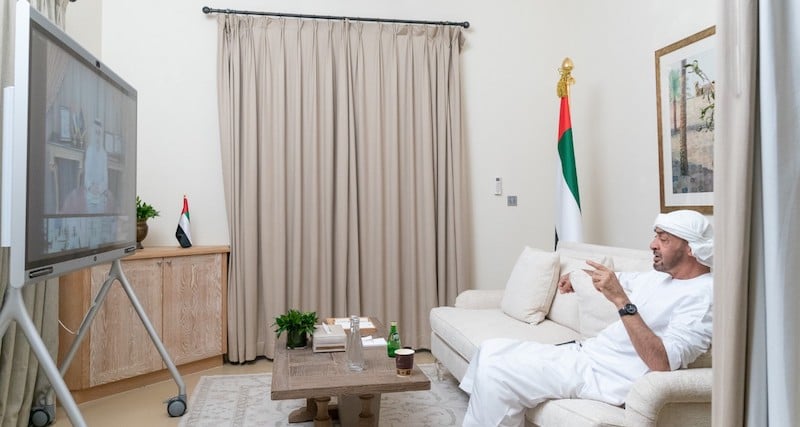 Sheikh Mohamed bin Zayed Al Nahyan, Crown Prince of Abu Dhabi and Deputy Supreme Commander of the UAE Armed Forces, was briefed during a virtual meeting with key ministers and officials on the latest precautionary and preventive measures to stem the spread of the Covid-19 pandemic in the country, reported official news agency WAM on Monday.

Read: ‘We will get through these tough times and survive’ – Sheikh Mohamed bin Zayed

“Food and medicine supply and other life essentials are in safe hands in the UAE whatever direction crisis may lead us in. We will never hesitate to take any measures against any potential threat to people’s life. At the same time, we won’t let the development grind to a halt. The coronavirus crisis has placed the government, the private sector and the entire world in the face of an enormous challenge, which is to protect people’s health on the one hand and to keep business mobility alive in our institutions while ensuring public services remain unaffected,” said Sheikh Mohamed bin Zayed during the conference call that was attended by representatives of the country’s education, food security, preventive health and economic divisions.

I was briefed about national efforts to control COVID-19 during a video call with officials. I am reassured that the UAE is fully capable of managing this situation and sincerely thank all those involved in the fight against the virus. pic.twitter.com/E7jX5s6U9n

Sheikh Mohamed bin Zayed thanked those “working in silence across the front lines, protecting our national security, dignity, economy, and the health and safety of our society and ensuring its protection.”

He also expressed his appreciation for compliance with the strict measures to contain the spread of the coronavirus by residents across the country, including the national sterilisation programme, and added, “The UAE is proud of our citizens and residents living on our soil. We are proud they (residents) share with us our identity. It’s really impressive to hear our residents echoing the National Anthem of the UAE on social media platforms as the National Disinfection Programme is being carried out nationwide. God bless you all, and God Willing, we will survive these trying times.”

Obaid Rashid Al Hassan Al Shamsi, director-general of the National Emergency and Crisis and Disasters Management Authority outlined during the meeting on Monday measures taken to contain the spread of Covid-19 pandemic in the country.

He said, “The ministry of health had carried out more than 220,000 laboratory tests across the UAE for Covid-19. This makes the UAE’s testing coverage at over 22,900 test per million people; the second highest test density in the world.”

On March 30, Sheikh Mohamed ordered the opening of such centres across the UAE capable of testing patients in a five-minute procedure and delivering results in six hours. The new centres will open in Dubai, Sharjah, Ras Al Khaimah, Fujairah, Al Ain and Al Dhafra over the next 10 days.

On Monday, the ministry also announced that the distance learning programmes currently underway at all public and private schools and universities in the country would be extended until the end of the 2019-2020 academic year in June.

There are 280,000 male and female students enrolled in the UAE’s government schools, 90 per cent of whom have used the ministry’s Smart Learning Portal during the first of week of the system’s application.

“The Ministry has purchased 30,000 computer sets for those segments of students who don’t have computer facilities available at home. We’ve also purchased and delivered thousands more sets for several national institutions. By the beginning of April, all those pupils who don’t now have access to these devices will be having them at home,” said the country’s education minister.

On March 23, the UAE had called on all Emirati students studying abroad – estimated to be around 4,000 – to return to the country as a precautionary measure against the global Covid-19 pandemic.

“Most of Emirati students abroad have returned home safe and they have been subjected to precautionary measures and placed under quarantine to ensure their protection,” the minister added saying that the ministry was in contact with those students to facilitate their distance learning programmes.

As for economic measures taken to combat the impact of the coronavirus on businesses within the country, the UAE has already announced a stimulus package of Dhs126bn to support businesses.

Abu Dhabi and Dubai have also announced separate measures to help businesses weather the financial impact of the crisis.

Sultan bin Saeed Al Mansouri, minister of economy, said that there are three priorities the ministry is working on at present: ensuring sustainable food supplies, tourism and hotels sector, and SMEs. “Nine adhoc committees and taskforces have been formed to address these challenges, ” said the minister of economy.

“Their Highnesses the Rulers of the Emirates are closely following up the measures taken under these trying times and I have no doubt we will emerge victorious in this menacing battle against this challenge, God willing,” added Sheikh Mohamed during the virtual meeting.