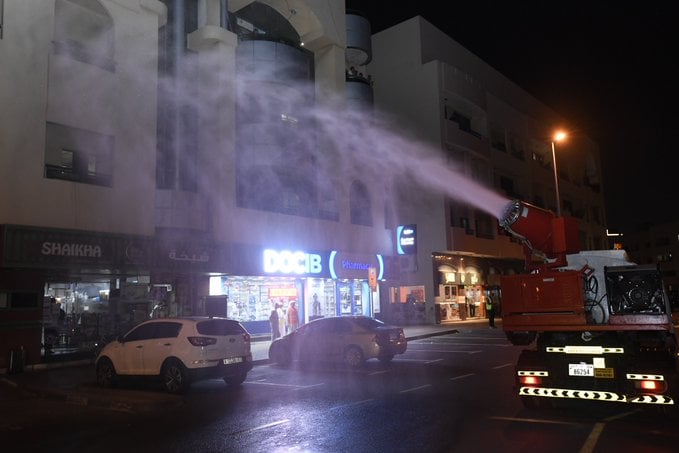 The UAE has extended its national sterilisation programme has been extended until Saturday April 4, concluding on the morning of Sunday, April 5, officials announced on Saturday.

The sterilisation will be carried out daily from 8pm until 6am the following morning and restrictions regarding the movement of traffic will continue, official news agency WAM quoted the Ministry of Health and Prevention and the Ministry of Interior as saying.

The UAE began the disinfection programme on Thursday, March 26, which covers public utilities, public transport as well as streets across the country.

The extension is aimed at expanding the disinfection programme to more facilities, a statement said.

Extension of The National Disinfection Programme until April 5 across the #UAE . #StayHome pic.twitter.com/E2BrgIOVL2

It comes even as the UAE announced 63 new Covid-19 cases on Saturday to take the total to 468.

On Friday, the UAE issued a resolution on regulations for spreading communicable diseases, under which those who ‘violate precautionary measures to curb the spread of Covid-19’ will face penalties of up to Dhs50,000.

Those leaving their home for non-vital work or for buying necessities during the sterilisation period will be slapped a fine of Dhs2,000.

Dr. Farida Al Hosani, the official spokesman for the health sector in the UAE, said that the response to the programme has been positive.

There is “a positive concern and commitment from the community that was reflected by the commitment of more than 70 per cent of the public, citizens, residents, and visitors, and this greatly contributed to facilitating the work of the teams at various levels.”

She added: “We are all confident that all citizens, residents and visitors will cooperate to raise the commitment and stay at home during the sterilisation period. This is the biggest support for the success of national efforts and thus the success of the programme.”

As part of the national disinfection program, Dubai Municipality on Thursday commenced a three-day expanded campaign to sterilize the emirate’s areas in cooperation with Dubai government departments.https://t.co/Li7ruzDK9Q pic.twitter.com/69W7Y6vi61