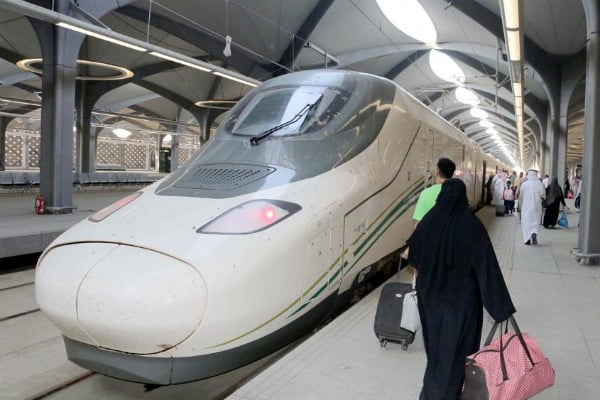 The railway line’s services were suspended in March 2020 to curb the spread of the Covid-19 pandemic.

Trips will now operate from and to the stations of Makkah, Madinah, King Abdulaziz Airport in Jeddah and King Abdullah Economic City.

Tickets are available to book on the railway’s website from Monday, March 15.

All the stations and train cars will follow precautionary measures to “guarantee the safety of passengers” and limit the spread of the virus, stressed Rayan Al-Harbi, deputy director of Haramain High Speed Railway and Holy Places.

“The decision to resume trips of the Haramain High Speed Railway between Makkah and Madinah on Wednesday, March 31, 2021 was made after ensuring the railway’s preparedness for operation and checking on safety standards to guarantee safe operation in preparation for receiving Umrah performers and visitors, in addition to ensuring full preparedness to this year’s Hajj season,” he said.

“During the stoppage period, stakeholders made sure to sustain the proficiency of workers at stations and trains through continuing experimental trips on the course of the railway to ensure their preparedness to continue work upon resuming operations.”

A new schedule of trips is set to be announced, he said.

The resumption of operations comes even as the kingdom began lifting all coronavirus restrictions earlier this month.

The 450km Haramain line, which began operations in 2018, has five stations — two terminus stations in Makkah and Madinah, and two central stations in Jeddah and Rabigh, and a fifth station at King Abdulaziz International Airport.

Each train includes 35 passenger cars with a capacity of 417 passengers on two-way trips between Makkah and Madinah.

The train travels at speeds of 300kmh and reduces journey times between Makkah and Madinah to less than two and a half hours.

The train line is eventually intended to handle 60 million passengers per year.

Saudi’s flynas to launch direct flights between AlUla and Cairo