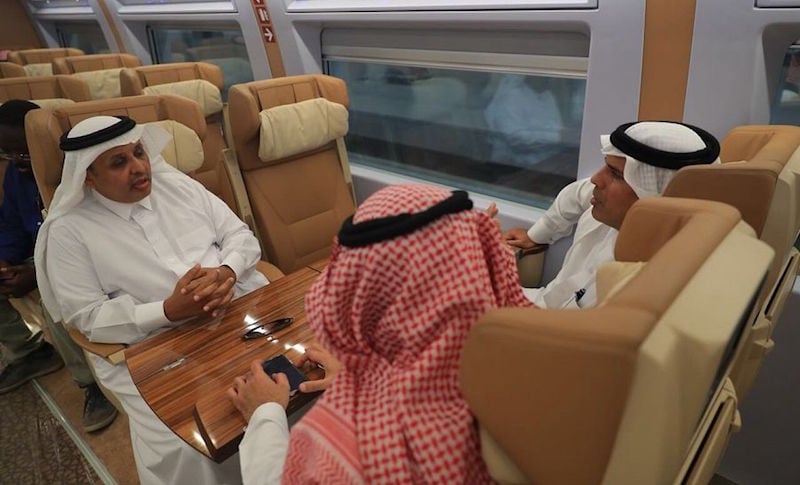 The ticket prices for Saudi Arabia’s high speed Haramain Express train – expected to begin operations this month – have been revealed.

The prices for the rail line vary depending on the class and the destination and start at SAR20, the official Saudi Press Agency (SPA) reported.

The ticket rate for the journey between the two passenger stations in Jeddah and Makkah has been priced at SAR40 in the regular class and SAR50 in business class.

The trip between Makkah and Madinah costs SAR150 in regular class and SAR250 in business class.

As an initial offer, the rail line will offer 50 per cent off prices for two months starting from October, confirmed chairman of the Public Transport Authority Rumih bin Mohammed Al Rumaih.

Al Rumaih also confirmed that from the beginning of October until the end of December 2018, there will be regular trains on Thursdays, Fridays, Saturdays and Sundays, starting from the stations of Makkah Al Mukarramah, Madinah, Sulaymaniyah in Jeddah and King Abdullah Economic City.

The launch of trains from the King Abdulaziz International Airport will begin after the station and airport are completed, the SPA said.

The trains will operate a total of eight trips per day in both directions (four trips in each direction).

The number of trips will increase throughout the week from the beginning of 2019 according to new schedules that will be announced, the report added.

The Al Haramain Express train website will allow passengers to book and buy tickets in October 2018 and an app will also be launched for booking tickets.

Officials also confirmed that the train stations have started to lease space for commercial activities.

The 450km Haramain line, linking the holy cities of Makkah and Madinah via Jeddah and King Abdullah Economic City of Rabigh, was originally due to open in 2012 but has been hit by delays and cost increases.

Trial runs of the project were completed in November last year, and free tickets were also handed out to citizens earlier this year ahead of the official launch.

The Haramain rail project will be operated by 35 passenger cars with a capacity of 417 passengers on two-way trips between Makkah and Madinah.

Dubai Police adds the Genesis GV80 SUV to its fleet