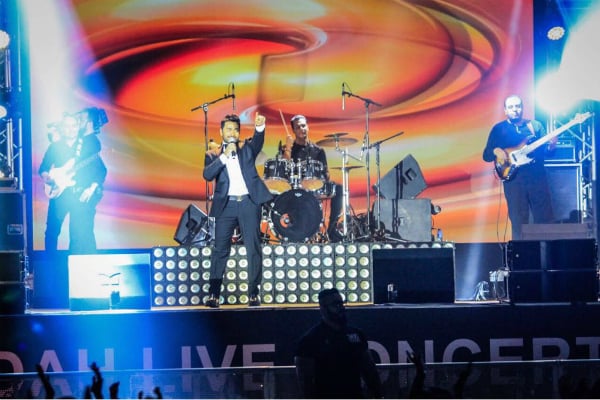 Bloomberg cited city officials as confirming the plans to boost its tourism credentials with the aim of attracting one million visitors a year.

“The idea is to increase interest, spending and create jobs in the city that will translate into more residents,” the CEO of project developer Emaar Economic City, Fahd al-Rasheed, was quoted as saying.

As part of these efforts the city hosted a concert by Egyptian singer Tamer Hosny on Friday and has set up an office to host exhibitions and events in cooperation with the kingdom’s entertainment authority, which has said it will stage more than 5,000 shows, festivals and concerts in 2018 as part of a drive to bring tourism dollars spent abroad back to the conservative kingdom.

KAEC currently has 6,500 residents of a planned two million across its area, which is the size of the Belgian capital Brussels.

It is hoping to lure more people, businesses and investors through 45 leisure and tourism projects, including 30 scheduled for completion this year, al-Rasheed told the news service.

The zone, located 75km north of Jeddah, is also providing free office space for five years and partnerships for development joint ventures to companies and investors that move there.

So far KAEC invested $533m in infrastructure including a race track, golf course and wellness centre.

These efforts come as the Saudi government prepares to approve new tourism visa regulation recently submitted by the Saudi Commission for Tourism and National Heritage.

KAEC was originally intended to be a logistics and manufacturing hub with a seaport and industrial zone but it announced a pivot to tourism in 2014 with plans to boost hotel rooms nights from 71,000 that year to 550,000 by 2020.

One factor that could help it towards this goal is the opening of a station on the Haramain high-speed line from Jeddah to Madinah.

However, the line has yet to open the public despite being scheduled for service in the first quarter.

There are also concerns that the city, which is managed by a joint venture of Dubai’s Emaar Properties and the Saudi government, could be forgotten amid larger projects led by the kingdom’s crown prince including the $500bn mega city NEOM.

At 26,500 square km the mega project is the size of Belgium rather than just its capital and has received commitments from firms including Japan’s SoftBank.