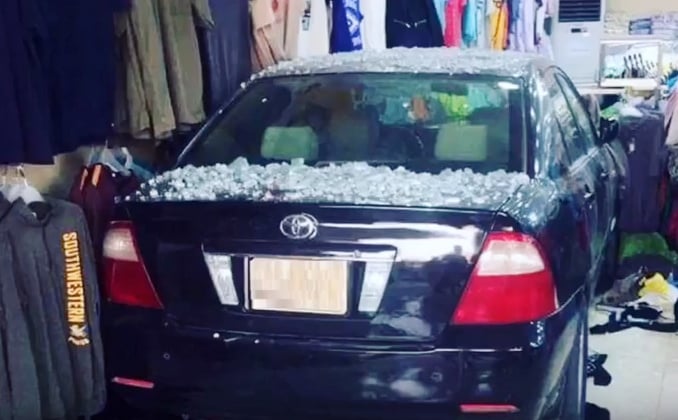 A female Saudi driver reportedly became the first woman to register a traffic accident in the Eastern Province after crashing into a shop on Thursday.

The kingdom officially lifted its ban on women driving on June 24 but there have been few reports of accidents involving female drivers to date.

Saudi Gazette reports that the incident occurred on Al-Najah Street in the town of Al-Mubraz.

The woman said she pressed the brake and the accelerator at the same time, according to the publication.

Pictures taken at the scenes showed the Toyota vehicle covered in glass next to racks of clothes. The vehicle reportedly travelled 12m inside the shop, terrifying workers.

CCTV footage posted on YouTube showed the vehicle entering the front of the shop at 4:25pm.

Two workers appeared to be stood in front of the entrance when the incident occurred, with one clearly knocked to the ground and requiring support from his colleagues in the immediate aftermath.

An elderly woman shopper suffered minor injuries and a salesman experienced more serious injuries to the arms and head and was taken to King Fahd Hospital in nearby Al-Hofof, according to reports.

Neither the woman or her husband, who was sat in the passenger seat, were injured.

The woman driver is said to have told investigators and her insurance company that she tried to stop the car but lost control.