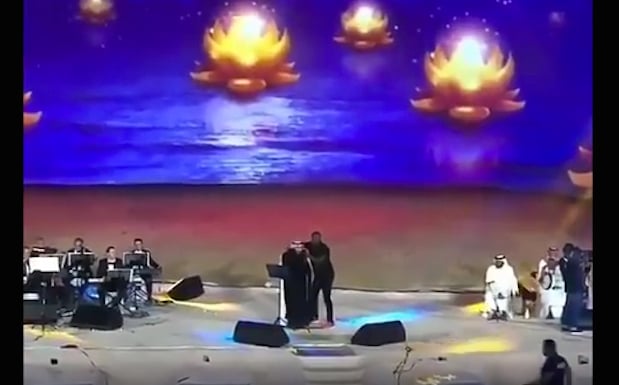 A woman in Saudi Arabia was arrested after she ran on-stage to hug a male singer during a concert in the city of Taif during the weekend.

The incident took place when Iraqi-Saudi singer Majid Al Muhandis was performing at the Souq Okaz festival in Taif on Friday. The woman, dressed completely in an abaya, rushed to the stage and hugged him.

Videos posted online showed the woman holding onto Muhandis while security staff tried to pull her away.

The singer continued to perform after the incident.

Makkah police arrested the woman under the anti-harassment law and placed her under the custody of the girls’ welfare institution in Taif, according to media reports.

The case has been referred to the Public Prosecution.

Saudi has strict laws regarding gender segregation and women are not allowed to mix in public with men who are unrelated to them.

The kingdom has relaxed some of its rules under Crown Prince Mohammed bin Salman’s Vision 2030 plan, allowing women to attend concerts and matches for the first time last year.

In a landmark move, the kingdom also lifted its ban on women driving last month, which was enforced in 1957.

According to a 2017 YouGov survey, 80 per cent of Saudi women interviewed wanted to get their licence and drive. This would amount to 7.8 million women who are keen to get behind the wheel.

A report by PwC found that by 2020, three million women will be driving in Saudi Arabia.

However, several activists who campaigned for the lifting of the ban remain in prison.

Also read: Saudi women are back in the driving seat