Saudi women are back in the driving seat - Gulf Business 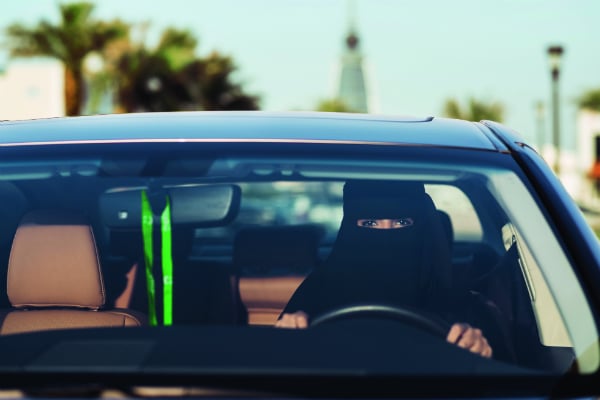 It’s been a long time coming, but after 61 years in the passenger seat, women are allowed to drive in Saudi Arabia again.

The 1957 ban prohibiting women from driving within the kingdom’s borders was finally laid to rest on June 24, when for the first time in two generations women took the steering wheel and drove on the roads of Riyadh and beyond – legally and without fear of repercussion.

The landmark move has been years in the making – especially for the countless women who have campaigned in earnest since 1990’s first high profile driving protest, which saw 47 women imprisoned; a fate shared by many activists today, who remain in prison despite the lifting of the ban.

For the vast majority of women in the kingdom, however, the move represents something of a new dawn, offering greater freedom of mobility, access to wider job opportunities, and the reclamation of rights.

The potentially far-reaching societal shift is matched by the possible economic changes on the table, with the automotive industry in particular expected to change dramatically in the coming years.

According to a 2017 YouGov survey, 80 per cent of Saudi women interviewed wanted to get their license and drive. This would amount to 7.8 million women who are keen to get behind the wheel.

And despite seeming a relatively modest figure compared to YouGov’s findings, the impact would still be huge.

“The most immediate impact would be on the volume of car sales and car leasing, and the ripple effect on insurance premiums and enablers like driving schools and maintenance,” Kudwah continues.

“Moreover, the increased mobility of women will positively influence the job market with women gaining greater access to jobs. It will cause new jobs to be created in the automotive sector to serve female drivers, female driving instructors and female traffic officers – or in the insurance sector. [The] present and future female workforce will drive new products and services offered in the market catering to this segment.”

The benefits to auto companies are clear, with several major brands already announcing their intent to win a large slice of the female market.

And there is plenty of pie to go around, with PwC suggesting that car sales growth could triple by 2020 compared to the period 2014-2017. The rate of increase in car leasing volume could also double from current levels.

Nissan announced that it wants its market share across the GCC to rise to 20 per cent by March 2023 – up from 16 at present – with the share in Saudi Arabia doubling to 14 per cent.

For its part, Ford launched a driving course for women entitled ‘Driving Skills for Life for Her’ as it seeks to win favour among the demographic, while Toyota was among the brands to reveal plans for dedicated all-female staff areas in its showrooms.

For Chevrolet, which has been in the territory since before the formation of Saudi Arabia as we know it in 1932, the kingdom was already a vital market. And the lifting of the ban is only expected to enhance this.

“As our largest market in the GCC for vehicle sales, Saudi Arabia has always been incredibly important to Chevrolet,” says Molly Peck, chief marketing officer at General Motors Middle East.

“So from a business perspective, the opening of a new subsection within that market is clearly a significant opportunity.

To make the best of this opportunity, Peck explains that Chevrolet invested heavily in research and audience insights to ensure the company understood women’s requirements and expectations before they joined the kingdom’s driving community.”

“In my 20-plus years of experience as a marketer in the auto industry, I have never witnessed such an opportunity wherein a whole new subset of consumers enter the market. It is unprecedented and requires a careful approach,” she says.

“Since the announcement, we have continued our engagement with women in Saudi by working to better understand their requirements and expectations.

“We look forward to welcoming the Saudi women who decide to join the driving community.”

Of course it’s not just car manufacturers that stand to benefit from the new driving rules in the kingdom. Ancillary products and services will receive a huge boost, as will a variety of sectors.

“Hence, economic sectors benefitting from lifting the ban might start with auto, insurance, retail, leisure, infrastructure and tourism. It is set to expand in the region in the long run. What we see in the short term will just be the tip of the iceberg.”

The motor insurance market, for example, is expected to grow by 9 per cent annually between 2017 and 2020, according to PwC – reaching SAR30bn ($8bn),

Another company looking to reap the rewards in the kingdom is homegrown Dubai-based ride-hailing platform Careem.

Having launched in Saudi Arabia in October 2013, and invested around $80m in its Saudi operations – in infrastructure, call centres, and on-demand transportation services in more than
70 cities across the country.

The company’s CEO and co-founder, Mudassir Sheikha, explains that the long-term prospects for Careem are exciting in Saudi Arabia – despite typically benefitting from people booking rides rather than driving themselves.

“We work in 14 countries around the region and the women in all these markets are driving, but we have 24 million people signed up to Careem,” he points out.

“In the long-term we expect to have more rides because the community is increasingly moving around and subsequently need more transportation. We will have more female employees and more female entrepreneurs. It means that the overall effect is very positive.”

The employment angle is an important one for Careem – not just in Saudi Arabia but across all markets it operates – with women in a strong position to explore careers with the company.

“This is in line with Careem’s commitment to create job opportunities across the wider Middle East region,” continues Sheikha.

“Careem is currently creating between 60,000 and 70,000 jobs per month and driving for a ride-hailing company provides the chance to be your own boss, earn an additional income and work your own hours. So it’s practically geared towards the needs of working mothers.”

Specific to Saudi Arabia, Careem has been training a cadre of ‘captinahs’, the female version of ‘captains’ – the term the company uses for its roster of drivers – with around 2,000 women having already registered their interest.

“That was beyond our expectations,” admits Sheikha. “Especially when we saw that applicants were from all parts of the kingdom and comprising a wide range of ages.

Enaam Gazi Al Aswad is among the first of Saudi Arabia’s captinahs, and reveals that independence was a key part of her decision to sign up with Careem.

“The attraction is the ability to work and earn a name and living for myself,” she says.

“I feel like I will be of service to people, and transportation is one of the most important services in any country, anywhere in the world.

“Economically, I will be able to earn more income easily, which is great for me. Socially, it’s the freedom to control and lead my life while also encouraging other women and men to do the same.

“Most Saudi women are teachers, businesswomen and leaders already. Now that women are able to drive, it just makes it easier and gives us the chance to take control and be more independent.”

The economic and social impact of such job opportunities will have a profound effect on Saudi Arabia in the years ahead according to PwC’s Kudwah, who points to a new dynamics in the job market that will lead to a “myriad of opportunities”.

“We are quite optimistic on the number of opportunities for women employment.”

For the business community in the kingdom, the reforms also send a clear message to local international investors that it is willing and ready to find new opportunities in the months and years ahead.

“Lifting the ban on women driving in the kingdom is just another example of the transformational journey. It behooves local businesses across economic sectors to explore ways and means to leverage this development by investing in the infrastructure, capabilities and skills development, local content and new products and services.”

As such, the removal of the ban could prove a pivotal step in achieving the goals of Vision 2030, which seeks in part to engage the full power of the nation’s workforce, diversify the economy, and attract foreign direct investment – all in a bid to not only safeguard the future of the kingdom, but also establish it as one of the world’s top-performing countries across a number of metrics.

The deeply symbolic move to put women back in driving seat exhibits the ‘new Saudi Arabia’ to the rest of the work, and intends to galvanise young citizens. And it appears to be working, with the 2018 Arab Youth Survey by ASDA’A Burson-Marstellar finding that 81 per cent of young Saudis support the removal of the ban.

But it is the long-term economic legacy that could well prove to be the major success for architects of the move.

“The economic impact for lifting the ban is far greater and more sustainable than the current PR hype around women driving in the kingdom,” says Kudwah.

“Saudi Vision 2030 sets very ambitious targets at an accelerated pace. It is expected that the execution requires that the Kingdom activates its delivery powers in full, and an increased economic empowerment for women is one of the strategic responses to execution demands.”

From economic gains to shifting cultural sands, the lifting of the driving ban on women has already had a profound impact on Saudi Arabia – an impact that is sure to deepen the further down the road we go.