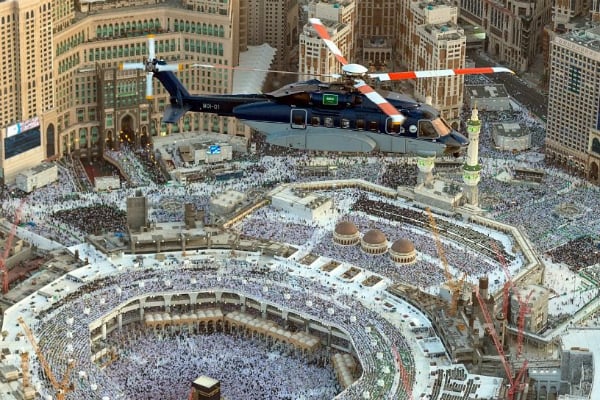 Saudi Arabia’s Ministry of Hajj and Umrah has said it will still welcome Qataris wishing to perform Umrah rituals despite a boycott that has been in place for the last year.

The kingdom, Bahrain, Egypt and the UAE expelled Qatari citizens and cut diplomatic, trade and transport links with the country on June 5 over its alleged support of terrorist groups.

The row has shown little sign of being resolved with Qatar invoking a ban on products from the boycotting countries last week and reportedly arranging celebrations to mark the anniversary.

“Based on the negative attitude and intransigence of the Qatari authorities to enable citizens and residents of Qatar to perform Hajj and Umrah rituals, the Ministry of Hajj and Umrah welcomes the Qatari people to perform Umrah rituals following a completion of registering their legal information upon arrival at King Abdulaziz International Airport in Jeddah,” the ministry said, according to Saudi Press Agency.

It added that expats in Qatar who wanted to perform Umrah could also register through the ministry’s website to complete electronic contracting procedures and select packages.

Qatari citizens and residents must travel through Jeddah’s King Abdulaziz International Airport on any airline other than Qatar Airways, which is banned from Saudi airspace.

This will likely mean connecting via Oman or Kuwait, which have not taken sides in the dispute.

Umrah is sometimes considered a lesser pilgrimage in comparison to Hajj, which can only be performed at a certain time of year and is compulsory for every Muslim able to afford it once in their lifetime.

Saudi Arabia has welcomed seven million Umrah pilgrims so far this year and is expecting a surge in visitors to Makkah for the last 10 days of the holy month of Ramadan, one of the most popular periods for the rituals.

Prices for hotel rooms near Islam’s holiest site, Makkah’s Grand Mosque, surge during this period due to demand with rates as high as SAR1,500 ($400) a day.