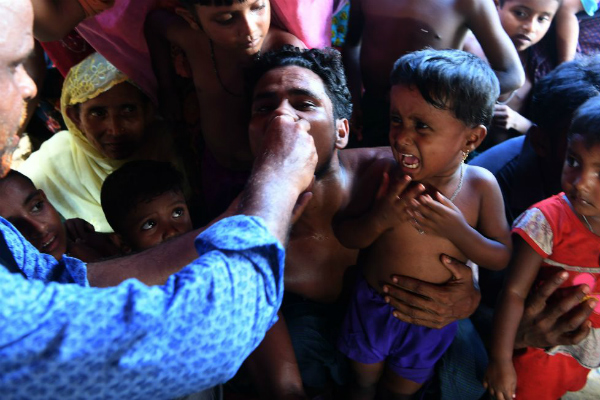 Saudi Arabia and the UAE have pledged a total of $27m to support Rohingya Muslim refugees at a donors conference in Geneva on Monday.

The pledges included $20m made by King Salman Centre for Relief and Humanitarian Aid made on behalf of Saudi Arabia at the event co-chaired by Kuwait, the United Nations and European Union.

More than 600,000 Rohingyas are estimated to have fled a government crackdown in Myanmar to neighbouring Bangladesh since late August.

Human rights group say the Muslim minority has long been denied citizenship and equal opportunities by the government. Around 200,000 Rohingya were already in Bangladesh prior to the crisis this year.

“More than 800,000 stateless Rohingya refugees in Bangladesh aspire to a life that meets their immediate needs for food, medicine, water, and shelter. But beyond that, a life that has hope for the future where their identity is recognised, they are free from discrimination, and are able to return safely to their homes in Myanmar,” said UN high commissioner for refugees Filippo Grandi.

The overall conference received pledges worth $335m including money pledged and committed since August 25 and new announcements.

The Rohingya refugees are expected to require $434m in aid over the next six months.

Saudi’s King Salman previously pledged $15m to support the Rohingyas in September and the King Salman Centre has sent a specialised team to Bangladesh.

Dr Yahya Al-Shammari, head of King Salman Centre, said the kingdom had provided $66m of aid to humanitarian causes over the last 10 years and received more than 300,000 Rohingyas over the last 40 years.

Earlier this month, UAE Vice President and Prime Minister and Ruler of Dubai, HH Sheikh Mohammed bin Rashid Al Maktoum, also ordered the use of his private Boeing 747 plane and the opening of an air bridge to provide aid to the Rohingyas.