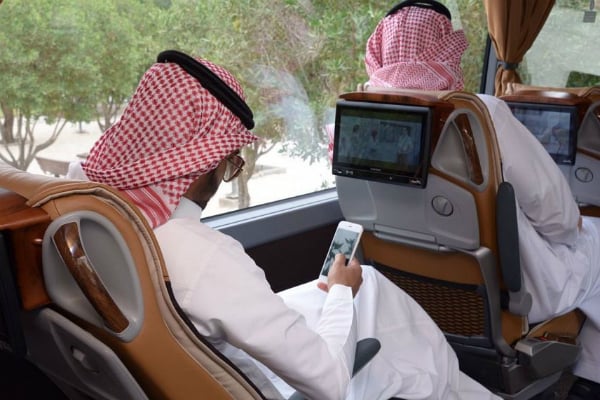 The Saudi Public Transport Company (Sabtco) has announced the launch of new luxury bus services between cities with live TV and Wi-Fi.

Director of external transport Turki Bin Abdullah Al Nader told Saudi Press Agency that the non-stop buses represented a “modern shift” for the company’s services after launching in Riyadh and Jeddah in February.

Sabtco has added 50 Mercedes Trafico 2018 buses to its fleet to operate the routes.

Each seat on the buses is fitted with an entertainment screen featuring a variety of programmes and live channels and has access to Wi-Fi. Hospitality is also offered to passengers during the journey.

The luxury service will be available for services between cities as the company prepares to expand with non-stop routes to Riyadh and Khobar, Riyadh and Dammam, Riyadh internally, Riyadh and Madinah and Riyadh and Makkah.

Tickets can be booked through the company’s smartphone app, customer service centre and sales offices.

Its introduction comes as part of wider plans to improve public transport links in the kingdom.

Work on metro systems in Riyadh, Jeddah and Makkah is underway, with the latter also awarding a $853.2m contract for a network of 400 buses to a consortium of Saudi’s Nesma and Spain’s TCC last October.