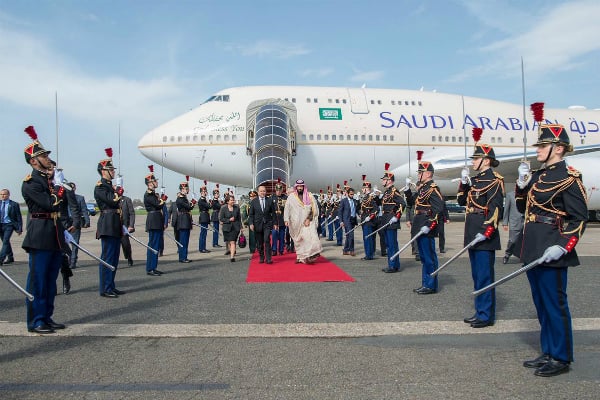 Saudi Arabia’s Crown Prince Mohammed bin Salman has landed in Paris after finishing a three-week tour of the United States.

The heir to the throne was greeted by an honour guard and French foreign minister Jean-Yves Le Drian on the tarmac at Bourget airport in images posted on Twitter by Saudi Press Agency, amid reports of tough dialogue between the two countries behind the scenes during their last meeting in November.

On the agenda for the two-day visit are the crises in Yemen, Syria and Qatar and the Iran nuclear deal along with a series of cultural events, political meetings and an economic forum.

He later rescinded the resignation following a meeting with Macron in Paris.

Mohammed bin Salman will meet with the French president, the country’s prime minister and trade officials and is also considering a visit to the Paris-based tech start-up campus Station F, the Arab World Institute and a concert in the southern city of Aix-en-Provence, according to Saudi Gazette.

Saudi media reported that the two sides are expected to sign 18 memorandums of understanding in industries including energy, agriculture, tourism and culture. Macron’s office said the main focuses of the trip would include the digital economy and renewable energy.

Reuters reports that similar announcements are not expected in France but the two countries will unveil a cooperation deal to develop archaeological site Al Ula, the capital of the ancient Lihyanites.

“Competition is fierce so we had to rethink the models of relationships. Less talk about major contracts and more focus on sectors that are less spectacular such as health, education and tourism,” a senior French diplomat told the newswire. 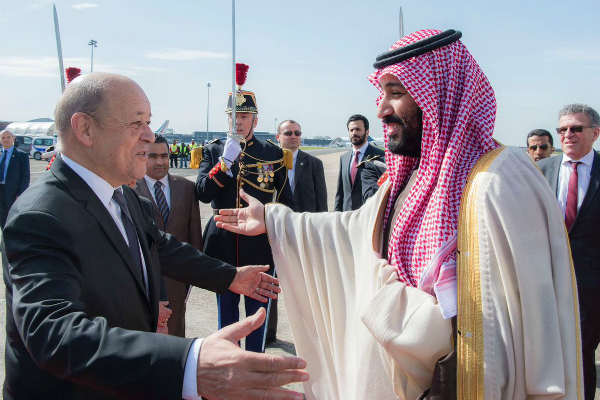 Macron has been under pressure at home over France’s weapon sales to Saudi Arabia as it fights in a coalition against Iran-backed Houthi rebels in Yemen.

As well as the civil war, Iran itself is expected to be a major talking point behind closed doors.

France has continued to push business ties with Tehran after signing billions of dollars worth of deals in the energy, aviation and automotive sectors since the 2015 nuclear accord.

The country’s foreign minister visited Iran last month to reaffirm European support for the agreement despite concerns regarding the country’s ballistic missile programme.

Saudi Arabia and the United States accuse Iran of providing Houthi rebels in Yemen with missile components that have been used to fire projectiles at Saudi cities.

The frequency of these attacks has increased in recent weeks and authorities have reported the first associated death after falling debris from an intercepted missile hit an Egyptian resident in Riyadh.