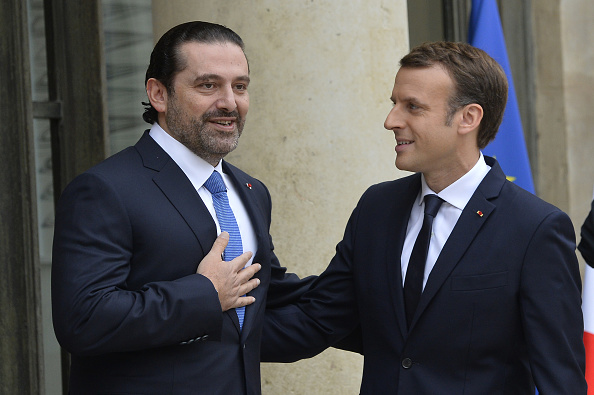 Saad al-Hariri, who resigned as Lebanon’s prime minister this month while in Saudi Arabia, said on Saturday he would clarify his position when he returns to Beirut next week.

Hariri’s resignation on November 4 threw Lebanon into political crisis and put it centre-stage in the Middle East’s overarching rivalry between Sunni Saudi Arabia and its allies and a bloc led by Shi’ite Iran.

Read: Lebanon’s Hariri to fly to Paris within 48 hours

“With regard to the political situation in Lebanon, I will go to Beirut in the coming days, I will participate in the independence celebrations, and it is there that I will make known my position on these subjects after meeting President [Michel] Aoun,” Hariri said after holding talks with French President Emmanuel Macron in Paris.

Hariri declined to take questions, but is set to return to Beirut by Wednesday when Lebanon celebrates its independence day. He thanked Macron, who has been mediating as part of French efforts to try to ease tensions across the region, for his help.

Macron had leveraged France’s close relations with both Lebanon and Saudi Arabia to secure a deal that saw Hariri travel to Paris and open the door to a resolution of the crisis.

Hariri, who arrived at his residence in Paris in the early hours of the morning, told Aoun in a phone call from Paris that he would be in Lebanon on Wednesday for the celebrations, the Lebanese president said on Twitter.

“Lebanon is being shaken so it’s important Hariri comes to Paris for us to work with him on the best way out of the crisis,” said a senior French diplomat.

“We’re trying to create the conditions for a de-escalation in the region. We want to avoid a proliferation of crises that could get out of control.”

Okab Saqr, a member of parliament for Hariri’s Future Movement, said after Hariri’s visit to France he would have “a small Arab tour” before traveling to Beirut.

A French presidential source said Macron had reiterated that Paris wanted Hariri to return to Lebanon to ensure the country’s political system continued to function and that it was imperative it remained “disassociated” from regional crises.

The source said Macron would continue to be active on the dossier in the coming days and that France was considering whether to host a meeting of the International Lebanon Support Group to discuss the political crisis.

The crisis has thrust Lebanon into the regional rivalry pitting Saudi Arabia and its allies against a bloc led by Iran, which includes the heavily armed Lebanese Shi’ite Hezbollah group.

Aoun has called Hariri a Saudi hostage and refused to accept his resignation unless he returns to Lebanon. Saudi Arabia and Hariri say his movements are not restricted.

Lebanon maintains a delicate sectarian balance after Sunnis, Shi’ites, Christians and Druze fought a civil war between 1975 and 1990, with factions often backed by regional rivals.

Hariri, a Sunni Muslim, is a long-time ally of Saudi Arabia. Aoun, a Christian, is a political ally of Hezbollah. Hariri’s government, a power-sharing coalition formed last year, includes Hezbollah.

France, which controlled Lebanon between the world wars, has sought to play a key role in defusing tension with Macron personally getting involved and putting him at the heart of a regional power struggle that will test his diplomatic skills.

That was evident since the outbreak of the Lebanese crisis over the last week with a surprise visit to Saudi Crown Prince Mohammed bin Salman in Riyadh, followed by a flurry of calls, sending his foreign minister to Saudi Arabia and then the invitation to Hariri, which caught many diplomats unawares.

While undoubtedly a diplomatic coup for Macron, some regional and French diplomats have cautioned that his strategy to try to appease all sides in the region may backfire.

On Saturday, US President Donald Trump spoke with Macron about the situation in Lebanon and Syria. The White House said the leaders agreed on the need to work with allies to counter Hezbollah’s and Iran’s destabilizing activities in the region.

Paris has intensified its rhetoric over Iran’s regional activities. On Thursday, foreign minister Jean-Yves Le Drian, speaking alongside his Saudi counterpart, denounced Tehran’s “hegemonic temptations”. Iran responded by accusing France of taking sides and Macron on Friday said Iran should clarify its ballistic missile programme. That was met by a rebuke in Tehran.

On Saturday, Ali Akbar Velayati, a senior adviser to Iran’s supreme leader, said Macron should stay out of its affairs.