Saudi crown prince goes West to woo allies, but could it be a tough sell? | UAE News 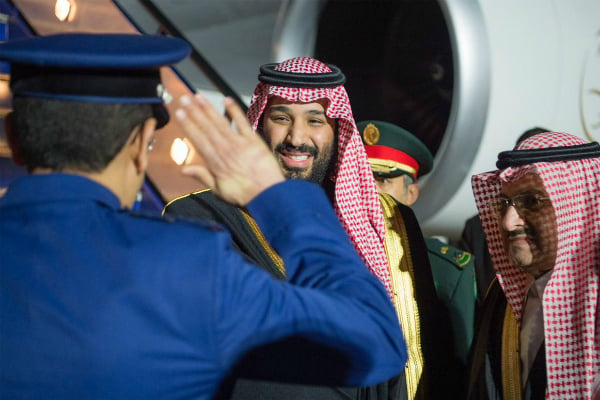 Saudi Arabia’s crown prince wants to persuade his British and US allies that “shock” reforms have made his country a better place to invest and a more tolerant society on his first foreign tour as heir apparent.

But it could be a tough sell.

But the severity and secrecy of an anti-corruption crackdown last November, after Prince Mohammed ousted an older cousin as crown prince in a palace coup last June, has unnerved some investors.

Though London and New York are rivals to host the partial public listing of state oil firm Saudi Aramco, the enthusiasm of some Western business leaders – even for such an important contract – has been sapped by concerns about human rights and a lack of limitations on executive power in Saudi Arabia.

“Investors are intrigued by MbS’s (Prince Mohammed’s) reform projects, and there will be a huge amount of interest in hearing his views, but uncertainty lingers,” said Jane Kinninmont, a Middle East expert at Chatham House think tank.

Rachel Reeves, head of an influential business committee in British parliament, warned against risking London’s reputation as a finance centre by watering down corporate governance rules to secure the Aramco listing. This, she said, could “ultimately damage our attractiveness to foreign investment.”

Prince Mohammed has defended last November’s crackdown, in which dozens of top business leaders and princes were detained, as necessary to combat “the cancer of corruption”.

Most detainees have now been released, and the authorities say they have arranged to seize more than $100bn in assets.

AUDIENCE WITH THE QUEEN

The ambitious young prince, just 32, is sure to repeat his message at talks in Britain with Prime Minister Theresa May and when he meets President Donald Trump during a visit to the United States starting on March 19.

He will also have a rare audience with Queen Elizabeth and dinner with Prince Charles, the heir to the throne in Britain, after arriving from Egypt.

London and New York have long been the frontrunners to host the international leg of the flotation, alongside a Riyadh listing, but Hong Kong is emerging as an increasingly likely compromise, according to two sources familiar with the matter.

Talks with faith leaders in Britain including the Archbishop of Canterbury, the senior bishop and principal leader of the Church of England, offer Prince Mohammed an opportunity to project a more tolerant image of Saudi Arabia, sources close to the trip told Reuters.

Under the reforms closely associated with the crown prince, social restrictions have been loosened, such as bans on cinemas and women driving. He has promised to promote a more moderate form of Islam.

Business deals are possible with British defence group BAE Systems and European weapons maker MBDA, and initial agreements could be concluded on gas exploration, petrochemicals and industry, according to British and Saudi sources. They gave no details of the potential deals.

Saudi Foreign Minister Adel al-Jubeir said on Monday that Britain’s planned exit from the European Union did not reduce its attractiveness as an investment destination, adding: We think that Britain is one of the great powers.”

But rights groups and opposition lawmakers have criticised London’s support for the prince, particularly over the licensing of GBP4.6bn ($6.39bn) worth of arms sales to Saudi Arabia since the start of the Yemen conflict.

“Theresa May should use this visit to announce the UK will no longer supply arms to Saudi Arabia while the devastating Saudi-led bombing of Yemen continues and make clear Britain’s strong opposition to widespread human and civil rights abuses in Saudi Arabia,” opposition Labour party leader Jeremy Corbyn said.

Prince Mohammed will hold talks with Trump before going to New York, Boston, Houston and San Francisco for meetings with industry leaders, as he seeks to shore up investments and political support from Riyadh’s closest Western ally.

Several dozen Saudi chief executives will join him in touting investment opportunities in the kingdom, particularly in the areas of technology, entertainment and tourism, a Washington source said.

Talks will also include a US bid to build two nuclear reactors in Saudi Arabia and a civilian nuclear cooperation agreement needed for that to proceed, an industry source said.

Riyadh wants to diversify its energy supply mix, enabling it to export more crude oil rather than burning it to generate electricity. But it has previously refused to sign up to any agreement that would deprive it of the possibility of one day enriching uranium.

The political agenda in Washington will feature a new push to end the dispute between Arab allies of the United States that has isolated Qatar over alleged ties to terrorism, a senior U.S. official has said.

The crown prince is also likely to reiterate to Washington and London the view of Saudi Arabia that its regional rival, Iran, should not be trusted over its nuclear programme.

Under a deal reached with major powers, Tehran agreed to curbs on its nuclear programme in exchange for a lifting on economic sanctions.