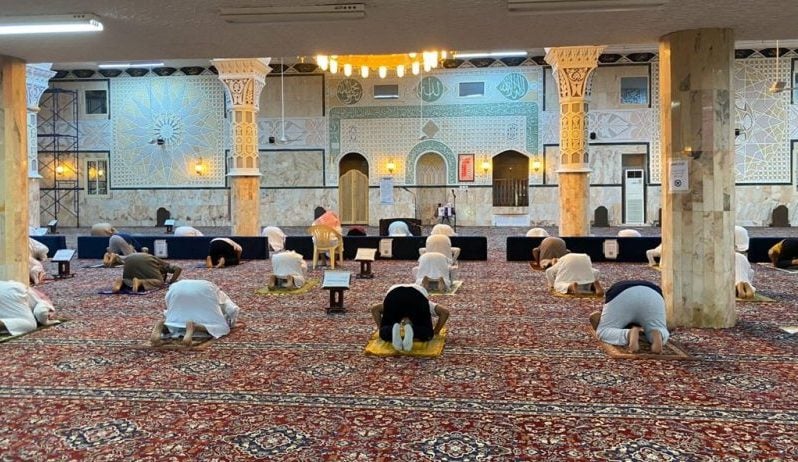 Over 90,000 mosques in Saudi Arabia reopened on Sunday as the kingdom began the second phase of easing lockdown restrictions.

Mosques in Saudi Arabia were closed two months ago to curb the spread of Covid-19.

As part of the reopening, the Ministry of Islamic Affairs said worshippers must adhere to precautionary measures including wearing masks, washing hands and maintaining social distancing.

For your safety when you go to the mosque, please adhere to these Precautionary measures. pic.twitter.com/9osPi15hg8

While mosques in the city of Makkah remain closed, the Prophet’s Mosque in Madinah will gradually open to the public starting Sunday. It will only allow 40 per cent capacity and the old building and holy site will be reopened later.

During the weekend, the Saudi minister of Islamic affairs Abdullatif bin Abdulaziz Al-Sheikh said an inspection of the mosques revealed that they had implemented the required measures for reopening.

“Mosques have completed the sterilisation and cleaning process to ensure the safety of worshipers,” the Saudi Press Agency (SPA) quoted him as saying.

The Ministry has completed its preparations to reopen 90,000 mosques across the Kingdom of #SaudiArabia, after the approval of the Custodian of the Two Holy Mosques to lift the suspension of Friday and congregational prayers in all mosques. pic.twitter.com/RTX3mdIrZu

Overall, in the second phase that will be implemented between May 31 – June 20, Saudi will lift the daily curfew from 6am-8pm across the country except in Makkah.

In Makkah, the curfew will be eased daily from 6am-3pm during this phase.

Attendance at private and government sector offices will be permitted during this phase provided that they adhere to the precautionary measures.

Domestic flights will also be allowed to resume.

Travel within the kingdom by varied means of transportation, besides private cars, will also be permitted.

Restaurants and cafes would be reopened.

However, gatherings of more than 50 people for social purposes such as weddings and funerals will continue to remain suspended.

The Ministry of Interior has also announced that strict penalties will be imposed on those violating the measures, SPA reported.

* SAR10,000 – To be imposed on private sector establishments not complying with the precautionary measures including allowing the entry of those not wearing masks; not providing disinfectants and sterilisers in the places designated for them; not checking temperature of employees and customers at the entrances to malls; not disinfectiing carts and shopping baskets after each use; not disinfecting surfaces; and those not closing game areas for children and fitting rooms.

The penalty shall be doubled if violations are repeated.

* SAR1,000 – To be imposed on individuals who intentionally violate the precautionary measures including not wearing masks; not committing to social distancing; refusing to check temperature when entering public areas or buildings; and failure to adhere to the procedures adopted when the temperature is higher than 38°C.

This is how tourism must shift to actually address climate change