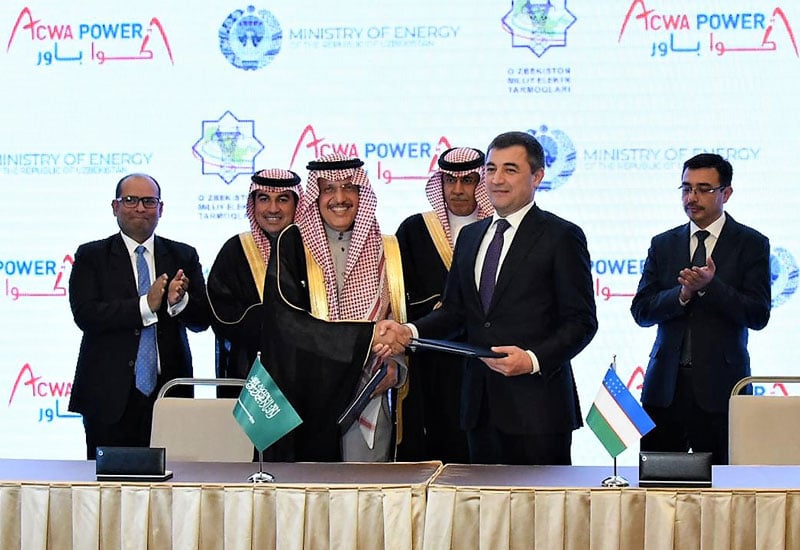 On Sunday, Saudi Arabia’s utility developer ACWA Power revealed that it had signed three agreements, potentially worth up to $2.5bn, with Uzbekistan’s Ministry of Energy.

The agreements include a $1.2bn investment for the development, construction and operation of a 1,500MW Combined Cycle Gas-Turbine (CCGT) power plant.

A 25-year power purchase agreement for the plant was also signed with JSC National Electric Grids of Uzbekistan as the sole off-taker.

An investment agreement for the plant was signed with the Uzbekistan’s Ministry of Investment and Foreign Trade.

The plant will be located in Uzbekistan’s Shirin City, in the Sirdarya region, developed as a ‘Build, Own, Operate, Transfer’ project with ACWA Power taking the lead in constructing, engineering, operating and maintaining the plant.

The CCGT plant’s efficiency rate will reportedly be in excess of 60 percent – saving almost twice the natural gas currently used for electricity production.

Besides the CCGT plant, the second agreement that ACWA Power has signed, valued at between $550m-$1.1bn, is to develop, finance, construct, and operate a 500-1000MW wind farm that will bolster the country’s push towards stimulating its renewable energy sector.

The third agreement entails an MoU between the Ministry of Energy of Uzbekistan, Air Products and Chemicals and ACWA Power.

This MoU agrees to develop local talent within the country by implementing training programmes to bolster the technical expertise of students and professionals at colleges in Uzbekistan.

The transfer of knowhow would eventually support a local supply chain for the utilities and chemicals sectors in Uzbekistan.

Commenting on the three agreements, Alisher Sultanov, Uzbekistan minister of energy said, “ACWA Power’s focus on smart, energy efficient technologies will provide more than 2000 MW of added power and enable us to achieve a more sustainable, secure and affordable energy ecosystem for our country.”

The chairman of ACWA Power, Mohammad Abunayyan, meanwhile added, “The market in this part of the world is thriving with economic activity that will stimulate private sector investment and participation in the energy sector. Our partnership will deepen the friendly economic relations between the Kingdom of Saudi Arabia and the Republic of Uzbekistan, and will allow us to utilize our capabilities to unlock the tremendous growth potential of the energy sector in Uzbekistan.”

In January, a report by Reuters stated that ACWA Power plans to invest about $10bn this year as it seeks out new projects in 10 countries, citing chief executive officer Paddy Padmanthan.

The report added that Saudi Arabia’s Public Investment Fund plans to boost its stake to 40 per cent from 25 per cent in ACWA Power.