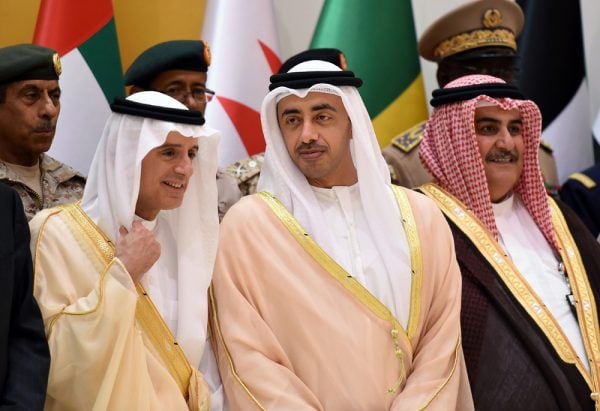 Saudi Arabia and other Arab foreign ministers will hold an emergency meeting in Cairo on Sunday to discuss confronting Iran and its Lebanese Shi’ite ally Hezbollah, who the Arab allies say are interfering in their internal affairs.

Hariri, a long-time Saudi ally, resigned on November 4 in an announcement made from Riyadh. Hariri cited fear of assassination and accused Iran and Hezbollah of spreading strife in the Arab world.

Hezbollah, both a military force and a political movement, is part of a Lebanese government made up of rival factions, and an ally of Lebanese President Michel Aoun.

Aoun has accused Saudi Arabia of holding Hariri hostage. Senior Lebanese politicians close to Hariri also said he was coerced into resigning. Saudi Arabia and Hariri both deny those accusations.

The emergency Arab foreign ministers meeting was convened at the request of Saudi Arabia with support from the UAE, Bahrain, and Kuwait to discuss means of confronting Iranian intervention, Egypt’s state news agency MENA said.

Saudi Arabia’s foreign minister Adel Jubeir told Reuters last week the kingdom’s actions in the Middle East were only a response to what he called the “aggression” of Iran.

“What Iran is doing against some Arab countries calls for taking more than one measure to stop these violations, interferences and threats, which are carried out through many various means,” Hossam Zaki, Arab League Assistant Secretary, told Asharq al Awsat newspaper in an interview.

He said the meeting would send a “strong message” for Iran to step back from its current policies.

A source in Lebanon’s foreign ministry said on Sunday the foreign minister was still in Beirut and was unlikely to attend. Lebanon will be represented by its representative to the Arab League, Antoine Azzam, the source said.

Anticipating confrontation at the Cairo meeting, a senior Lebanese official had told Reuters on Saturday that Lebanon’s foreign minister may not go to Egypt.

Speaking in Paris, Hariri said he would clarify his position when he returns to Beirut in the coming days. He said he would take part in Lebanese independence day celebrations, which are scheduled for Wednesday.

Saudi Arabia also accuses Hezbollah of a role in the launching of a missile at Riyadh from Yemen this month. Saudi Arabia’s Crown Prince Mohammed bin Salman said Iran’s supply of rockets to Houthi militias was an act of “direct military aggression”.