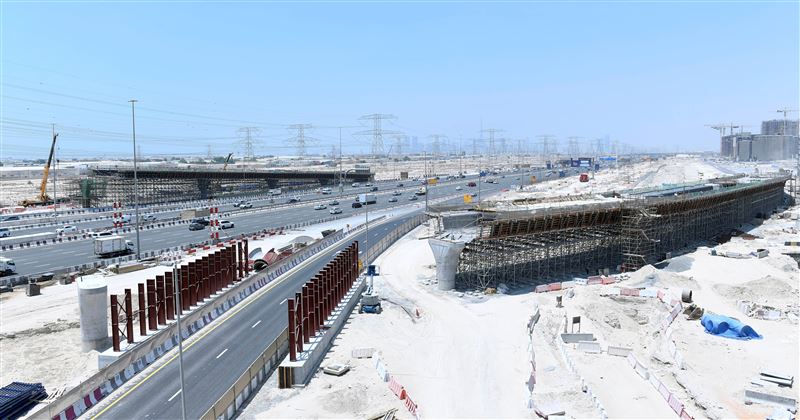 Construction of the bridges and roads leading to Dubai Hills Mall at the junction of Umm Suqeim Street and Al Khail Road is now 45 per cent complete, the Roads and Transport Authority (RTA) has announced.

The Dhs780m project, being undertaken by RTA along with Dubai Hills developer Emaar Properties, is expected to be completed in the first half of 2020, a statement said.

“The project encompasses the construction of 12 bridges spanning 3,700 metres with a width varying from 11 to 22 metres in addition to ramps connecting the bridges measuring 2500 metres,” said Mattar Al Tayer, director-general and chairman of the RTA.

The new bridges, which consist of four lanes in each direction, will separate the traffic from Umm Suqeim Street and Al Khail Road, leading to greater traffic capacity in the area.

The existing four lanes of Umm Suqeim Street will be maintained in both directions.

“The project covers the construction of internal roads at Dubai Hills Estate to ease the movement of residents of Al Barsha South 1 and 2, and link them with new roads and bridges. Works also include the installation of traffic signals, shifting of utility lines, and landscaping,” added Al Tayer.

Overall, the project aims to ensure the smooth flow of traffic from and to Dubai Hills Mall as well as on Umm Suqeim Street and Al Khail Road, the RTA said.

Spread out over two floors, the mall will feature over 650 retail and F&B outlets, four major family entertainment and leisure centres including an 18-screen cineplex, a 63,500 square feet hypermarket, retail experience stores, and parking spaces for over 7,000 vehicles. It will also feature a link to the Dubai Metro once an expansion project is completed.