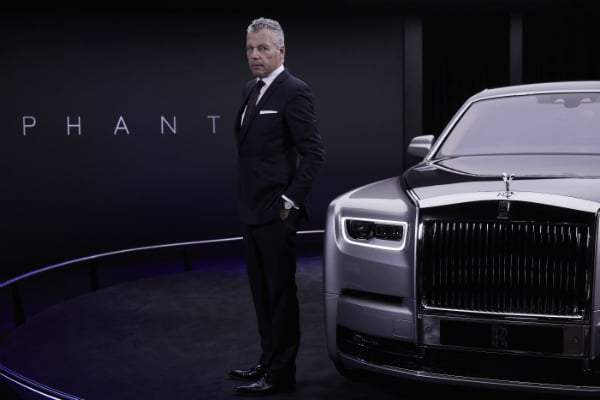 British luxury car brand Rolls-Royce is expecting a second year of declining sales in the Middle East amid tough market conditions, but should move back into positive territory in 2018, according to its CEO.

The Middle East was one of the few major markets where the BMW-owned manufacturer saw sales decline last year, but it remained the company’s third largest globally.

Worldwide deliveries increased 6 per cent to 4,011.

Weaker consumer spending has also hit the wider auto market in the Gulf Cooperation Council as a knock-on effect of the lower oil price.

“This region of course is a little bit more difficult than it has been before due to many issues be it oil price, economy and the stock market situation,” Torsten Müller-Ötvös told Gulf Business.

“That of course has impacted also consumer sentiment to a certain extent and for that reason our business formally had been stronger in the Middle East.”

Amid this decline, Müller-Ötvös said Dubai could lose its title as the company’s best selling dealership globally, after it took the crown from Abu Dhabi last year, but he is confident of the appeal of Rolls-Royce vehicles in the region in the longer term.

Moving into 2018, the company is expecting its new Phantom, a vehicle the CEO describes as a “triumph”, to drive regional sales back into positive territory.

Previous Phantom models made up a “significant part” of the company’s Middle East sales.

“This is traditionally a very strong Phantom country and region for us,” he said. “We discussed yesterday with our dealer bodies in the Middle East and our order bank is looking very healthy.”

Another vehicle the company is expecting to boost overall sales is its secretive sports utility vehicle concept the Cullinan. Customer orders from the region are already coming in as the company prepares to deliver the first models from the end of 2018.

“The more people hear about it the more they are getting excited and some people are even getting nervous, maybe some of our so called competitors who are rolling up new product ideas to counteract what we have in mind,” Müller- Ötvös added.

“We have a fresh product on the ground with Phantom, as I said, and project Cullinan to come next year so that should give us an uplift next year that’s for sure.”

However, Müller-Ötvös believes it is still too early to determine whether Saudi Arabia’s decision to allow women to drive from June next year will be a positive for the manufacturer in the showroom.

“We already have quite a lot of female customers also in Saudi Arabia, Sheikhas who have bought the car to be driven [around]. Is this changing? I think so it will change. Will it bring in general additional business we haven’t seen yet? Lets wait and see, it’s hard to say.”