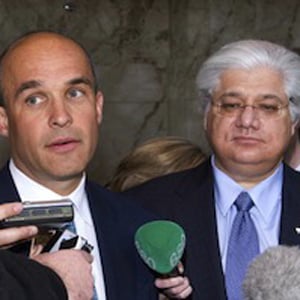 Research In Motion has shaken up its top management with Thorsten Heins, a chief operating officer who joined RIM four years ago from Siemens, taking over as CEO with immediate effect from Jim Balsillie and Mike Lazaridis.

Ontario-based RIM’s stock tumbled 75 per cent last year as market-share declined with consumers opting for Apple and Android devices. RIM, which dominated the US smartphone market before Apple and Google entered it, had its share of sales drop to 16.6 percent in the three months ending in November. Google’s Android boosted its share to 46.9 per cent and Apple’s increased to 28.7 per cent.

Lazaridis, who founded RIM in 1984, will become vice chairman; Balsillie will remain a board member without any operational role. RIM, once the most valuable company in Canada, has lost 88 per cent since its peak in 2008, when soaring BlackBerry sales pushed its market value to more than $80 billion.

Hein, 54, say’s that RIM’s 75 million subscribers, “strong balance sheet” and negligible debt are a strategic advantage. He said the company’s focus on its own software will yield results in the long term, a strategy which mimics Apple. Other handset makers, such as Samsung, HTC and Motorola have boosted sales by using the Android software Google gives away for free.

Delays have cost RIM badly with their tablet, the PlayBook, entering the market late and then taking another nine months to add email to the device. The first BlackBerrys, based on a new system called BB10, won’t be available until the latter part of this year.