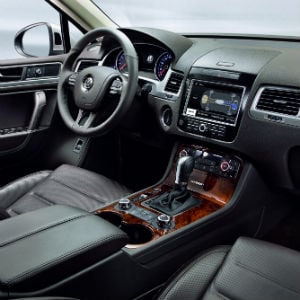 Whether we like it or not, SUVs have taken the world by storm over the last decade, and the roads of the UAE seem to have a higher proportion of these oversized sedans than those of many countries.

One has to wonder just how many of the UAE market’s vast array of ‘soft-roaders’ ever roll off the tarmac, often being purchased more for their form than their functionality.

From the exterior, this latest variant of the Touareg looks elegant enough to valet at even the most swanky five-star establishment without fear of reproach, while exuding a tougher, more physical stance than its forebears.

This is reflected partly in the more pronounced guards, along with the front-end’s new letter-box grille, which is a new trademark feature across Volkwagen’s entire model line-up.

Inside, the Touareg also blends opulence and functionality, combining plush leather seats and interior accents of thin walnut paneling with the more brash, modern highlights of aluminium and soft-touch rubber.

With a keyless ignition, thumbing the start button awakens the V6 FSI direct-injection engine that powers the vehicle, providing ample thrust and even a reassuring rumble within the upper rev-ranges.

Paired with the powerplant is an eight-speed transmission, with cogs seven and eight both being overdrive gears.

Providing quick, smooth up- and down-shifting, there is minimal lag time between depressing the accelerator and feeling the power transferred to the drive-train. Excellent at cruising speeds, the Touareg also displays a rapid turn of pace when pushed, with strong performance for easy overtaking, getting you from A to B smoothly and speedily.

Safety is also covered, with nine airbags throughout the cabin, along with a raft of technology. The console-mounted 6.5-inch TFT display is linked to an intuitive, high-spec GPS and a multi-directional camera system. In addition, the Touareg is comes with adaptive cruise control and lane assist, the latter sending a vibration through the wheel and flashing a visual alert should you begin to wander without using an indicator.

There’s also a world-first technology in the Touareg’s high-beam headlights, with a sensor that automatically shifts their angle to avoid dazzling approaching vehicles or slower traffic in front.

While I stuck mostly to paved surfaces in the few days spent with the Touareg, it did step onto the sandy stuff on a number of occasions. You’re unlikely to tackle Abu Dhabi’s Moreeb Dune in this vehicle, but the extra ride height and superb suspension come in very handy for negotiating some of Dubai’s sneaky off-road shortcuts.

The 2011 Touareg also has an off-road driving programme, activated by a button on the centre console. This tunes the ABS, electric differential lock and automatic slip regulation, also simultaneously engaging the Hill Descent Assist and adjusting the automatic gearshift points.

While such features are a welcome addition for those who like the flexibility of a vehicle with some all-terrain capability, other features are less well-suited to the UAE, particularly during the summer months.

The panorama sunroof, stretching the length of the roof, would be fantastic in Europe and even okay during the UAE winter, but it is somewhat redundant when the temperatures reach 40+ degrees on most days.

Still, this barely detracts from the winning package that is the 2011 Touareg, and it’s yours for from Dhs 157,000.