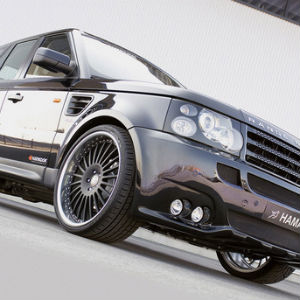 The Queen of England. David Beckham. Jordan. A disparate collection of personalities, all linked by one common thread: Range Rover ownership.

Now in its third generation, it first roved the range (or, as some cynics would have it, dropped the kids at school) in 1970. Since then, the Range Rover has become the quintessential four-wheel drive of choice across the whole social spectrum. Whether you use it for the school run, or for navigating the Empty Quarter, its desirability never diminishes and I do admit to a minor bit of salivation at the prospect of a weekend-long test drive.

Sat on its haunches roadside, it gives the air of a sleepy shire horse. It’s huge and powerful-looking, but not in an ungainly way. It has inherent grace and nobility, but also looks like it’s ready to take on the toughest job of work you can throw at it. As it was the five-litre V8 supercharged model, the one I drove did have more sportier bodywork, something I would normally run a mile from and leave to the footballers, but the changes to the standard model were minimal – muscular, but not overly so. Its dark grey paintjob was refreshingly different from the ubiquitous black or white Range Rovers one sees in the city, too.

As the air temperature outside was hovering around 43oc, I couldn’t wait to get in and get some air-conditioned relief. The cabin is one of the Range Rover’s outstanding features and is just how you would imagine it to be. Like a well-appointed drawing room in a townhouse from the pricier end of London, the old luxury motoring stalwarts of wood, leather and aluminium were present in abundance, all finished superbly and effortlessly tasteful.

While, there’s no white-gloved butler to serve up the cucumber sandwiches and pour the Earl Grey, this being a Range Rover, every motoring whim is taken care of. Switches and buttons are the order of the day and electricity takes the strain of every little adjustment to get comfy. The gizmo I was most pleased to see that day was the cooling seat button, and I made a mental note to mention it, as I was so pleased was with its posterior cooling magic. Bliss.

Pressing firmly on the brake, I pushed the starter button. I was expecting a roar and a V8 burble (present), but there was an additional undercurrent of menace, even at idle – a touch of the Wild Rover. Selecting Sport transmission, the supercharger and five-litre block gave me a bit of a shock.

Surely, something this big shouldn’t accelerate the way it does? I slowed to a stop and did it again, just to make sure. Three more times, in fact. Each time, it grunted and roared and a few seconds later it was doing 100 km/h. Easy as that. No mean feat when you consider it weighs as much as it does – equivalent to a medium-sized country house. That’ll be the 625 Nm of torque, then.

Although I never ventured off-road once, it’s difficult to image any dune or slope defeating such a powerful block. And the whizz from the supercharger is a great soundtrack, never mind the 1,200-watt Harman Kardon Logic, 19-speaker sound system. Save AC/DC or the Stones for another day would be my advice and just revel in it.

Of course, there’s so much I could write about the new Range Rover model: its engineering, its entertainment and comfort, as well as the effortless drive it affords. This would all be relevant, but what I really want to convey is the standard of excellence throughout. It is a real ensemble piece, and if you have the financial wherewithal, I say there’s no 4×4 that comes close. They say money can’t buy you class, but they’re wrong. Ladies and gentleman, I give you Exhibit A.