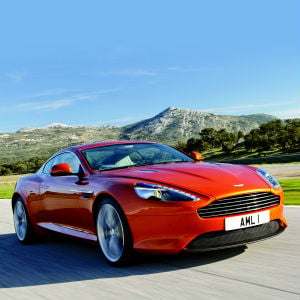 The Andalusian town of Ronda, about 100 kilometres northwest from Malaga, is as historic as it is beautiful. The Guadalevin River runs through the city, dividing it in two and carving out the steep 100-metre deep El Tajo canyon upon which the city perches. Looking out from this lofty perch all you see is rolling hills and roads that snake, carve and hug the countryside like mad pieces of spaghetti. In other words, if you want to seriously drive a car and test its limits, this is the place to do it.

The Islamic poet Salih ben Sharif al-Rundi was born in Ronda, and if he had laid his eyes on the Aston Martin Virage it might have inspired some epic verse. The Virage is a moving work of art with its clean lines, muscular stance and aggressive front. The attention to detail is immaculate both inside and outside and the Aston Martin team was beaming like proud parents as they showed off their latest addition to the family.

Under the bonnet the Virage has a V12 6.0-litre engine that delivers 490bhp and 570nm of torque that propels the Aston from 0-100km/h in 4.6 seconds. The top speed is a sizzling 299km/h. Keeping control of all that speed and power are huge carbon ceramic brakes, a very sweet six-speed Touchtronic 2 automatic transmission and a new Adaptive Damping System.

Those winding Spanish B roads didn’t know what hit them. The Virage is perfectly well behaved, tackling corners confidently and cruising with ease. But when you push the accelerator the V12 barks with excitement and the unleashed torque slightly lifts the nose and pushes you back in your seat. Stuck behind a caravan of cars with only 30 metres of straight road ahead? No problemo! The Virage accelerates so quickly it might as well be a kilometre.

That, in a nutshell, is the beauty of the Virage. It is an extremely comfortable GT (gran turismo) with the body and brawn of a finely honed athlete. You can drive it any which way you want and it always delivers exactly what you want, when you want it. That’s what makes driving it so much fun. The only downside is that all that pedigree will set you back around $240,000.