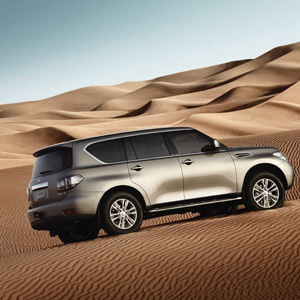 The Nissan Patrol has an international reputation for being a mean off-road machine. In fact, the original Nissan Patrol G60 was the very first vehicle to cross Australia’s daunting Simpson Desert in 1962. Closer to home, the Patrol is famous for making short work of dunes and everything else the Empty Quarter can throw at it. With that kind of pedigree, Nissan cut no corners when it came to making sure that this Patrol continues the proud family tradition. Nissan says it spent 13,265 hours (553 straight days) just heat and dust testing the new Y62 Patrol in the Middle East and Australia, so it can handle some serious conditions. The new model also makes use of an entirely new platform and chassis so it has twice the lateral rigidity of the Y61 Patrol.

If you are looking for design subtlety, the Patrol might not be your cup of tea. Viewed from the side, straight lines dominate broken only by a slight flaring over the wheel arches. The front is dominated by a large grille that is given extra impetus by the solid bumper (there’s an off-road spec bumper available), while the backlights have enough LEDs for a 70s disco. Simply put, the Patrol exudes a no nonsense desert-eating attitude.

Inside, it’s a different story as there’s none of the austerity associated with the earlier models. The leather seats and steering wheel combined with the high-quality soft touch plastics and polished aluminium give a very up-market ambiance to the cabin. The front seats are comfortable and there is plenty of room in the rear seats for three normal-sized adults (there’s seating for eight). The party piece, however, is the giant LCD screen and two rear 7-inch screens, each capable of playing from different sources. The dashboard screen can be used to watch movies (when stationary) or when left to the on-board computer it can show everything from satellite-navigation, the vehicle’s fuel usage over a period of time to maintenance settings as well as displaying stats for a ‘world first’ tyre pressure monitoring system.

The Patrol looks big and it is with an overall length of 5,140mm, a width of 1,995mm and a kerb weight of 2,785kg. Although it has front and rear cameras, I struggled at first reversing it out of parking places. But that had mainly to do with me driving an unfamiliar SUV. Going forward I had no problem as the Patrol is a pleasure to drive. In fact, it is a wolf in sheep’s clothing, and I mean that as a total compliment.

At cruising speeds it handles just like a luxury SUV should. Quiet, effortlessly and smoothly it eats up the road with a minimum of engine or other sound intrusions. But slam down the accelerator and the 5.6-litre V8 engine (298kW and 550Nm of torque) will let you know it is alive and well. There’s a pleasing throaty growl and the seven-speed automatic gearbox goes through gears quickly, smoothly and never misses a beat. The Patrol is deceptively fast, you might think you’re doing 120km/h but it will be more like 150km/h. It wants to be driven and that’s a difficult challenge to resist. Living in Dubai I’ve often witnessed Patrols growing larger in my rear-view mirror at an alarming rate. Now I know why!

Doing a u-turn one day I accelerated too hard and the tires actually spun briefly before the traction control jumped in and the body rolled slightly from right to left before centring again. But that’s the only body roll I felt and there’s nothing wrong with the Patrol’s cornering ability or stability. Just be careful with that accelerator until you have the measure of this vehicle.

After spending the weekend with the Patrol I can say it has a lot going for it. Its outside appearance might not be to everybody’s liking, but the way it drives is beyond reproach. Patrol fans know why they love their vehicles, and they will be well pleased. Plus, I’m pretty sure the Patrol will also convert plenty of other buyers to the Nissan family. Expect to be overtaken by one soon.