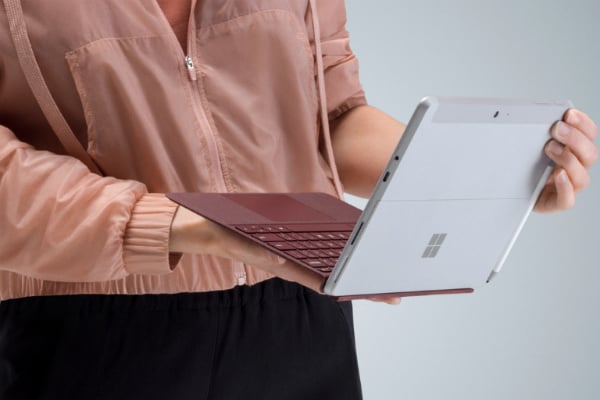 As someone who enjoyed this year’s Surface Pro but found it a little pricey, I was a little curious to see what the slimmed down Surface Go could offer.

Microsoft’s latest device downsizes its premium offering with a lower $399 price tag to match (although admittedly without the keyboard attachment).

For this lower price you are getting the smallest variant in the line to date, with the device easily able to fit into a mid-sized handbag or satchel without too many difficulties. But despite the 1.15lb weight it still has the same premium feel as its bigger brothers.

This smaller frame comes with a keyboard attachment to match. The alacantara version used during the review retails for an extra $130 and feels responsive if a bit cramped at times.

It can certainly perform well for typing notes on your lap during conference sessions with a tight seating arrangement but if you’re sat at a desk the smaller keyboard and track pad can leave a little to be desired.

Pairing with a Bluetooth mouse or pen can ease this feeling somewhat but it’s hard to escape the impression that you’re using a tablet with a keyboard attachment rather than a full-on laptop, especially given the need to use the kickstand to angle the screen depending on your seating arrangement.

With this said though, the Surface Go does a lot of things better than your standard tablet and in the right situation it shines.

Most noticeably, having access to Windows 10 rather than your Android or iOS makes for an experience more similar to your regular workstation with productivity benefits to match when answering emails or word processing.

In return, you won’t be getting access to the same vast app selection seen on Android or iOS devices but there are at least a few of the more popular ones like Netflix available for download and use when the keyboard isn’t attached. And of course the ability to install Windows software can never be dismissed.

In leisure time, the Pixelsense display offers a pleasant experience for watching a TV series, YouTube clip or just general web surfing although it would have been nice if the bezels around the screen were a bit smaller to increase the viewing real estate. The bezel space does at least host some surprisingly powerful onboard speakers, meaning the standalone tablet performs well as a multimedia companion, and the front camera is perfectly adequate for skyping, video conferencing and a handy face unlock feature.

However, whether work or play you’ll want to be a little careful as to how much load you put on the 4-8GB of RAM and Intel processor. I noticed slowdown at times on when multitasking and on the occasional websites with particularly heavy multimedia features.

If you are relying on the Surface Go for a full work day or long plane journey you’ll also likely want to bring the charger with you given the roughly six to seven hours of battery life but there is at least a USB type C power port if you forget the main cable.

After a few weeks using the Surface Go I came to know its flaws but also appreciate its strong points. While it’s not really suitable as your main work device it can certainly act as a more portable companion for those occasions when your beefier laptop isn’t needed.

For note taking, word processing and browsing on the go the device is in its element and after a busy day working at a trade show you’ll certainly see the benefits over lugging around a larger and heavier alternative.

The Surface Go is available in the UAE from Dhs1,699