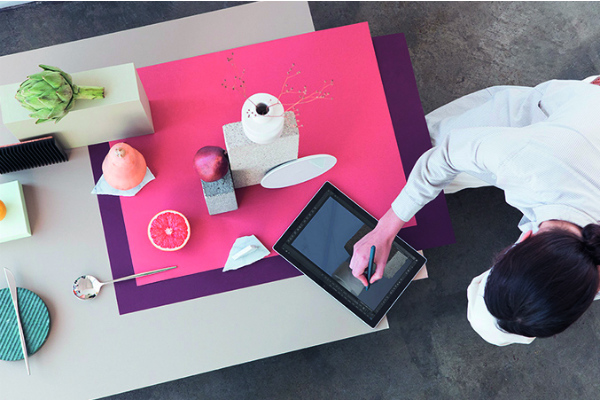 I have to admit when I was first approached to review Microsoft’s Surface Pro with LTE Advanced I was a little sceptical.

After all, Microsoft’s offering would have to do something pretty special to justify a price tag up to two-to-three times higher than your standard laptop. Not to mention the added expense of having to acquire accessories like a mouse and pen (and possibly keyboard).

But after a few days using the new mobile internet connected variant I am more convinced of its use case for the on-the-go business executive.

What immediately becomes apparent out of the box is the device’s portability. At 14.47mm thick at its widest point and 2.76lbs it fits far more snugly in your standard workbag than more traditional equivalents without skimping on too many features.

The Intel processor and up to 16GB of RAM and 1TB of SSD storage inside are up to most work-related tasks and basic gaming and the 13.5-inch LCD ‘PixelSense’ display is attractive when used in conjunction with a keyboard or just as a standalone tablet – even if the dimensions mean you will have black bars at the top and bottom of the screen when viewing full screen video.

On the accessories side, I found the pen included in my review bundle responsive and accurate enough to allow for some quite detailed design work. The recommended alcantara-coated keyboard with trackpad feels light, comfortable and easy to use and the arc mouse works well. However, these are of course an additional expense that will each set you back Dhs250-500 ($70-$136) or more at present.

I was particularly appreciative of the face unlock feature, which makes the process of getting to work from powering on slick and simple. This method also proved to be surprisingly accurate and would not grant access to other people during testing.

If anything detracts from the device’s work-friendly nature it is perhaps a lack of port options, with a single USB slot, and the reliance on a flick stand to keep the screen upright while using the keyboard, which means it isn’t always easy to use when resting on your lap and in other seating positions.

Despite this though, the LTE variant’s portability is not to be underestimated and it certainly feels refreshing to be able to use a Windows laptop without being shackled to a Wi-Fi network or fiddling with your smartphone to set up a mobile hotspot.

You can whip out the device in the back of a taxi, on the metro or while sitting in a park or on the beach and get straight to work – certainly a dream for freelancers or workers who spend a lot of time out of the office.

One potential limitation I anticipate from the review period is data usage, and if you are picking up the bill from your telecoms service provider you will certainly want to limit just how much you are using the LTE connection via the settings – especially in some Gulf countries where data packages can be expensive.

The other consideration for the on-the-go worker will of course be battery life. During testing the device didn’t live up to its lofty promise of up to 12.5 hours of usage but the seven-to-eight hours it did last is certainly not bad and means you should be able to get through most of your standard work day.

All in all the Surface Pro LTE variant delivers more or less everything you would expect from a Windows laptop in a more flexible package. But while working from anywhere with a mobile connection does grant new freedom, it is hard not to feel that the cost of the device and the added accessories will be prohibitive for many potential buyers. If you can convince your boss that it is worth the money though you’re sure to enjoy the experience.

As a final side note, and as other reviewers have pointed out, LTE connected laptops may be about to become a lot more common as new chipsets hit the market this year meaning this level of portability could soon become the norm.

The Microsoft Surface is available in the UAE from Dhs4,199 with the Pro LTE Advanced variant coming in at Dhs4,507