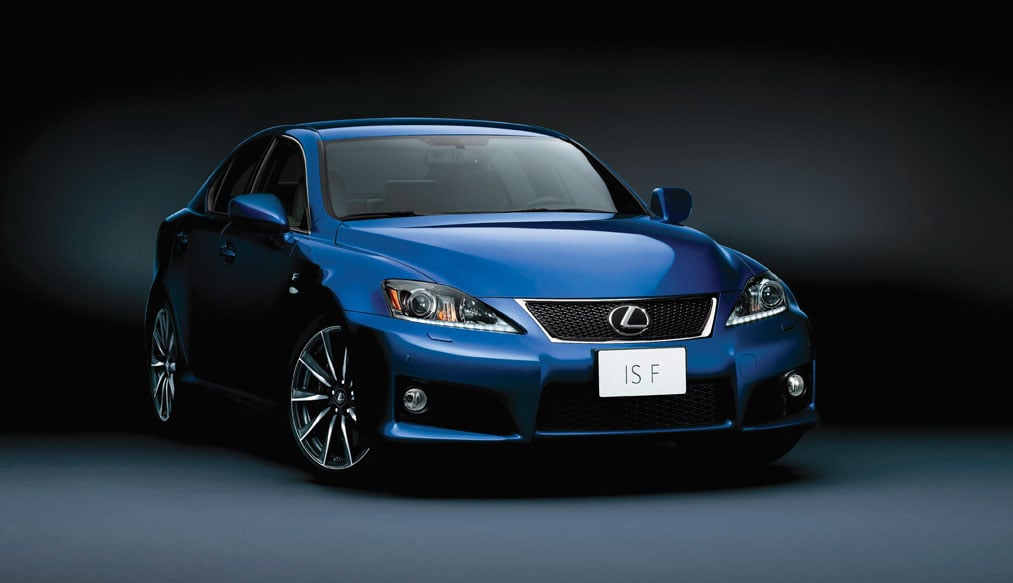 I never thought I’d use the words ‘fun’, ‘exciting’ and ‘Lexus’ in the same sentence. Luxurious, yes. Reliable, ditto. Sensible, naturally. But you wouldn’t have caught me buying one. Well, that opinion has changed faster than the Lexus IS F does 0-100 km/h (4.8 seconds, in case you’re wondering).

The IS F (the F stands for Fuji speedway) story starts with a Japanese engineer, Yukihiko Yaguchi, who has worked at Toyota for three decades. Apparently Yaguchi had the high-performance itch to build a premium sport sedan that would equal or beat the best of its class from Europe. In short, a car he wanted to own. When his bosses didn’t share his enthusiasm he gathered some fellow engineers and started working secretly on a car with huge horsepower, racetrack-inspired handling and enormous stopping power. Eventually management saw things his way and the first Lexus IS F appeared in 2008 to the consternation of motoring journalists who didn’t quite know what to make of it. Some said it wasn’t refined enough, others criticised the hard racing suspension, and a third group felt it was just too uncompromising to take on the Germans. Yaguchi and Lexus’ answer was to keep improving the IS F, which brings us to the 2011 model.

Appearance-wise the IS F’s exterior isn’t radically different from the standard Lexus IS sedan. Yet it hints at its high-performance credentials with a lower stance, quad-stacked exhaust pipes and a subtle rear spoiler, wider wheel arches featuring side vents to house the 19-inch forged alloy wheels, a deep front spoiler with larger grille and intakes, and the bulging hood that accommodates the performance tuned 5-litre V8. The IS F may not be a moving work of art but it definitely has kerb appeal.

Inside, the IS F also maintains a balance between sport and class. The thick multifunction steering wheel is a pleasure to hold, instrumentation is clean and intuitive and the two-tone leather-trimmed front sports and standard rear seats look the part. Further sporty touches are a silver carbon fibre effect finish around the gear shift, aluminium pedals and a blue LED lit speedometer. There’s also no shortage of creature comforts with a dual-zone automatic climate control, a 14-speaker Mark Levinson audio system and an easy-to-use multi-information display.

But the real beauty of the IS F is revealed as soon as you push the ‘Start/Stop’ button. Accelerate normally and the IS F is more cat than tiger. But when you ram down the accelerator the engine emits a wild muscle car growl that gives you goose bumps. Add to that heart-stopping acceleration as 417 horsepower surge through the eight-speed automatic gearbox and the specially designed Michelins bite into the tar. Alas, that incredible soundtrack is far too short as in a blink you’re at 200 plus and heading for a rendezvous with the legal system. Time to hit the superb Brembo brakes.

There’s some things you can’t put into words, and the sound of the IS F’s V8 in high-performance mode is one of them. If I had my way, the IS F would sound like that all the time. Unfortunately, it would then lose its premium sedan credentials so some compromises have to be made. Sigh! Yet the Lexus IS F does manage to keep a healthy balance between premium sedan and racing machine.

Can you use the Lexus IS F on a daily basis? Certainly! Driven normally it is most definitely a refined sedan with great sound insulation. For the 2011 model, Yaguchi focused his attention on the suspension and he’s managed to reach an almost perfect compromise between comfort and road holding. Hard suspension? I think not. The IS F quietly soaks up bumps yet you can throw it into corners at speed. The steering is meaty and accurate, although it could have more feedback. Is the IS F still uncompromising? Yes, but in a very good way. The IS F is unapologetically Japanese, and whereas that can often mean reliable but slightly dull, that isn’t the case here.

Criticisms? Well, I’m 1.8 metres tall and I didn’t have much headroom. There also wasn’t much legroom in the rear once I’d adjusted my seat. The eight speed automatic transmission does a good job of keeping the economy down to a claimed 13 L/100 Km in urban conditions, but that also equals to a lot of gear changes.