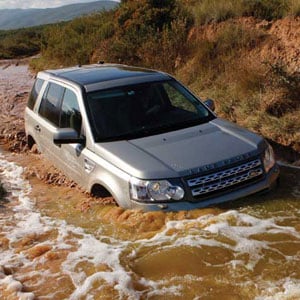 So trust me when I say that the Freelander 2, or LR2 as it is known here, is not a pretend off-road vehicle. That is both the LR2’s strength and weakness as an SUV can be designed to be a road warrior at the expense of its off-road capability, or the other way round. As you’d expect from Land Rover, the LR2 has a slight bias towards the wilderness with decent ground clearance, standard all-wheel drive and plenty of electronic aids to help provide traction in challenging terrain.

Aesthetically, it’s a case of if it works just tweak it as the 2011 Land Rover LR2 is largely unchanged, with the exception of a few minor grille and taillight alterations. Inside, it is all supple leathers as befits a luxury SUV. Getting my 1.8 metre body into a comfortable driving position was easy enough as the upright seating position provides plenty of legroom and headroom. The same goes for the rear, unless the front seats are pushed all the way back. The front seating position gets full marks for its clear, unobstructed view off what is going on around the vehicle.

The instrumentation and controls are logical enough and I didn’t spend any time hunting around for functions. Some reviewers have complained that the instruments and controls are a bit busy and hard to read, but I didn’t find that the case. I think it has more to do with the fact that the upright seating position gives one a steeper line of sight to the instrument binnacle. The navigation system is also mercifully easy to operate, although the screen isn’t as large or well positioned as some of the LR2’s competitors.

I did find the whole starting procedure a bit cumbersome as you stick the key fob into the provided slot and then push the start/stop button. To retrieve the key you push it into the slot to eject it. Now I know I’ve been spoilt by keyless systems lately, but it is a feature I’d expect in this luxury SUV.

Under the bonnet the LR2 has a 3.2-litre V6 with 171 kW power output at 6,300 rpm and 317 Nm torque at 3,200 rpm. That adds up to 0-100 km/h in just under nine seconds. That’s not blistering fast but the LR2 doesn’t feel underpowered in any way. Sure, it would be nice to have some more horsepower but the engine moves the LR2’s two tonne weight efficiently enough. There’s no problem with overtaking and the six-speed automatic transmission does its job well. At high revs the engine is a bit loud, but not particularly intrusive.

The LR2’s driving characteristics do, however, reveal its bias towards off-road performance. In corners there’s a bit more body roll than I’d like, the steering could be more communicative and the suspension feels a bit spongy when you hit a bump. On the positive side the brakes are razor sharp, the LR2’s long wheel travel absorbs big ruts and dips with ease, and the chassis is rock solid. This Land Rover is a vehicle designed for steady, reliable cruising, not speedy stunt driving. Once the desired speed has been reached, the LR2 cruises calmly with a cushioned, luxurious ride.

Safety features are ample for the LR2, and include antilock brakes, electronic traction control, dynamic stability control, cornering brake control, emergency brake assist, seven airbags, including side curtain airbags, and roll stability control – an ideal feature for anyone wanting to take the LR2 off-road.
Overall, I liked the LR2. Sure, some of its competitors are faster and more agile on the road, but there are few SUVs that trump it in overall ride quality. Add to that its off-road pedigree, reliability and high resale value and I know which compact, luxury SUV I’d take if the Camel Trophy was revived.