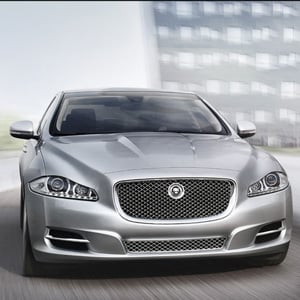 Moving house, a week of leave and Ramadan working hours had left me somewhat unprepared for the Jaguar XJL Supersport (the L stands for long). Simply put, I hadn’t done my homework. So when I picked up the car I cruised in a very gentlemanly fashion down the freeway enjoying the opulent interior, comfortable ride and the minimal cabin noise. In fact, I was so relaxed that I almost missed my turnoff. Whoops, best I put my foot down and get in the right lane. Yikes! The XJL jumped forward like a tiger that had its tail stepped on, my head snapped back against the headrest and the speedometer hit ‘your license is suspended and your car will be impounded’ territory in a flash. OK, lesson learnt, treat this cat with respect.

Had I done my homework I would have known that the XJ has been the jewel of the Jaguar line-up since 1968 when the first XJ6 rolled out of the factory. I’d also have known about the XJL’s supercharged 5.0-litre V8 engine that propels the 2,390kg kerb weight from 0-100 km/h in 4.9 seconds thanks to 625Nm of maximum torque. Apparently the XJL has a top speed of 250km/h, but I didn’t test that claim.

Ever since moving to The Villa in Dubailand I’ve had great fun throwing my Porsche Boxster S around the twisty corners of semi-deserted roads. Now I’m not stupid enough to compare a two-seater mid-engined sports car with a five-seater luxury high-performance sedan. No, the point I’m trying to make is that the XJL is amazingly agile, not only for a car of its size, but for most cars. And we are talking about a 5,247 mm long and 2,110 mm wide vehicle. However, it should be noted that the XJ series is actually lighter than its class competitors thanks to an all-aluminium monocoque chassis and other refinements.

In standard driving mode the XJL is biased towards comfort, which meant some slight body roll when punching it through my personal test track. Yet it never felt sloppy or like it wanted to let go. In Sport mode the ride noticeably firmed up and the cornering was solid. I would have liked the steering to be a bit firmer and provide more feedback, but other than that I have to say that this is one agile cat.

The XJ series is equipped with the ZF six-speed automatic transmission that’s so good that there’s really nothing to write about. It’s quick, smooth and never hunts for gears. In fact, you totally forget it’s there. Thanks to the supercharger and 5.0-litre engine, torque is almost always available. As long as you are at 2,500 revs and above the XJL takes off like a scalded cat. In Sport Manual mode you can use the Jaguar Sequential Shift paddles to get a more involved driving experience but I never had the urge to use them. Let the Jag worry about the mechanics and you about the driving, and everybody’s happy.

Appearance-wise the XJ series looks bold and powerful although the coupe-like shape may not be to everybody’s liking and it does have a negative effect on the boot space (520 litres). Inside, there’s plenty of space both for driver and passengers with 1,121 mm of rear legroom.

The modern interior easily defies the cliches thrown at its predecessors although there’s still plenty of leather and wood. Think ‘Cool Britannia’ not ‘Old Britannia’. Round air vents with blue-lit rings are a prominent feature on the single-needle stitched dashboard, plus Jaguar has firmly entered the future with a wide-aspect ratio LCD that replaces all conventional gauges. A neat party trick is that when you engage Sport mode the LCD display turns from blue to red. The large, dark-tinted panoramic glass roof is standard on all XJ models, but due to the low-slung shape of the roofline, the glass doesn’t extend as far back as the heads of the rear passengers, making it more of a way to illuminate the rear cabin than a way for rear passengers to peer skywards.

So there you have it Ladies and Gentlemen, the XJL Supersport manages to combine the seriousness and luxury of a Jaguar with the playfulness of a kitten.