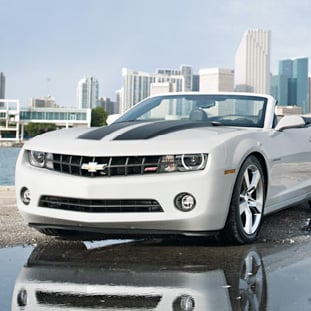 If you prefer caviar to steak and Mozart over Bruce Springsteen, you can stop reading now. The Camaro SS is not for you. This is an unpretentious, no holds barred American muscle car. Subtlety isn’t its strong point, but performance is. Plus it comes with a pedigree that dates back to 1966.

In the 1950s hot rodding was all the rage as Americans stuck large, modified engines into old cars chassis and went drag racing on abandoned airfields, tracks and public roads. It didn’t take long for American car manufacturers to realise that the youth market was crying out for affordable cars with big engines. And so it came to pass that ‘muscle cars’ were born, a term that generally refers to American-made two-door sports coupes with powerful engines designed for high-performance driving. It is this DNA that underlies Chevrolet’s Camaro and Corvette, the Ford Mustang and the Dodge Charger.

Besides being wickedly powerful and fast, early muscle cars were known for one major shortcoming: they didn’t corner well. That was fine in drag races, but not very practical nor safe in every day use.

That thought is uppermost in my mind as I throw the Camaro SS into a tight corner at a relatively fast speed. Will the tail go out and send me into a spin? Nope, not at all! The rear end stays perfectly in line with the front, the 20-inch tires gripping solidly and I become increasingly more daring as I accelerate through the corners. Myth busted, the Camaro can corner with the best of them. I love the thick steering wheel that’s easy to grip, the steering resistance feels like it should and the feedback is spot on.

There is one thing that puzzles me though, where’s the muscle? After all, the Camaro SS has a 6.2 litre V8 that’s good for 400 horsepower and 567Nm of torque when coupled with the six speed automatic transmission. And yes, when I put my foot down it goes down a gear, there’s a surge of power, and then it changes up and goes back to normal. It seems a different approach is called for. So, kick down the accelerator and keep it floored and yes, that’s what I’m expecting. A V8 growl, the gears change on the red line, and the Camaro’s broad snout is eating the road. This is pure testosterone-driven fun.

Talking about testosterone, my car-loving wife who collects more speeding fines than me, doesn’t get the Camaro at all. “Too plastic,” she says. And she has a point. The bonnet is plastic, the door inlays plastic, the binnacle surrounding the funky retro gauges is plastic as well. Not good plastic, but the kind that shouldn’t be in a $59,000 car.

She also doesn’t like the Camaro’s signature hood bump as she rightfully says it makes its difficult to see the road edge. Lucky for her the Camaro has six-way electric seats that raise and lower the driving position, otherwise she wouldn’t have been able to look over the steering wheel. The rear view is also limited, the back seats as useful as those in a Porsche 911, and the boot-size isn’t exactly generous (but it does have a glow in the dark emergency release, in case you ever lock yourself in your boot. Only in America). And, like most ragtops, there’s a lot of wind noise once you hit 120.

Mind you, her eyes do open wide and her knuckles go white when I give her a demonstration of the Camaro’s power, speed and cornering ability.

On the plus side, the four-piston Brembo brakes have the required stopping power, the four-wheel independent performance suspension is tuned right, and the six-speed automatic gearbox does its work well. And the eight speaker, 245 watt Boston Acoustics system is indeed music to one’s ears. Plus the SS is loaded with lots of goodies such as remote keyless entry, front Sport bucket seats, tire pressure monitoring system and multifunction steering wheel to name a few.

The Camaro’s exterior appearance screams American muscle with its strong lines and it has the aggressive stance to match its performance. More than once I saw people looking at the car and talking animatedly. With the power folding roof down it looks even better. The Camaro definitely has presence.

I drove the Camaro for four days, and every day I liked it more. But it puzzled me, what exactly was it that I liked? Somehow, I couldn’t distill it into words. Sure, I loved flooring the accelerator and watching cars disappear in the rear view mirrors. Yes, it was pleasing to see motorists scuttle out of the way of the Camaro’s Tiger shark mouth. After a while I didn’t care about the plastic anymore and I stopped looking at the fuel gauge.

As I drove the Camaro into the parking lot for the last time I felt a twinge of sadness. That’s when it finally dawned on me. In this age of frugal four-cylinder turbo engines, V8 American muscle cars are an anachronism. The Camaro harks back to better days when global warming wasn’t an issue, subprime mortgages hadn’t been invented yet and the American dream was alive and well. In short, the Camaro takes you to a better place and time. Isn’t that the whole reason for buying a car in the first place?