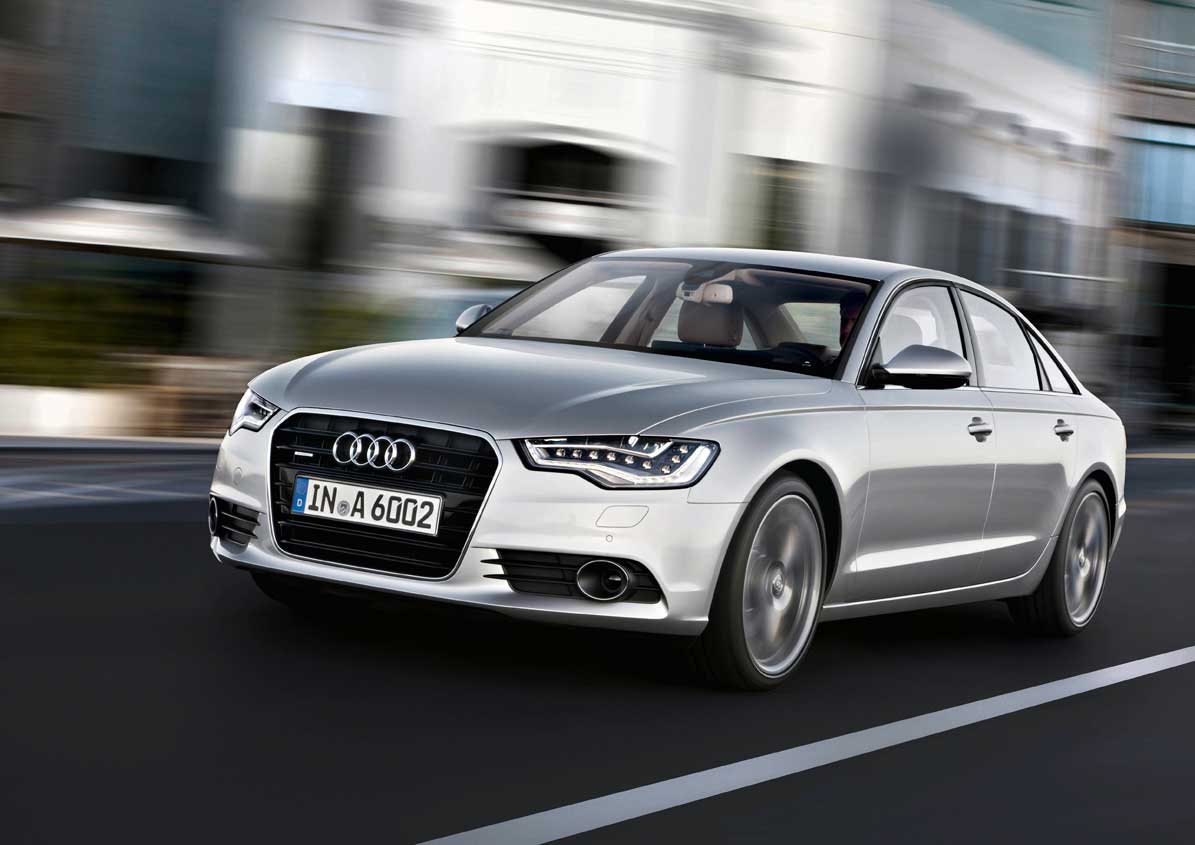 Audi bills the new A6 as “the successor to the world’s most successful executive sedan.” Since its first launch as the Audi 100 in 1968 it has shifted seven million units worldwide and is now in its seventh incarnation. That the Middle East is a serious market for the company is highlighted by the fact that the new A6 was specially developed for the Middle East region. A case in point is the four-zone automatic air conditioning system that has had its performance upped to cope with the local summers. Plus the Multi Media Interface (MMI) is now available in Arabic, including all menu points, navigation maps and voice instructions.

Regionally you have the choice of two petrol V6 engines, the 2.8 FSI and the 3.0 TFSI. Regardless of which model you choose you get the new S tronic transmission and the latest generation Quattro four-wheel drive. And, unlike some its competitors, the A6 has an extensive list of standard equipment including the MMI, a multifunction leather steering wheel, parking system and electronic front seats with memory function.

Getting behind the wheel of the new A6 3.0 TFSI proved to be a familiar yet different experience. As I own an A4 I found pretty much everything where I expected it to be. But even a first-time Audi driver would have no problem dealing with the logical ergonomics. It’s a matter of personal taste, but I firmly belief that Audi’s instrument panels are in a class of their own and it’s no different in the cockpit of the new A6. Between the tach and speedometer you have a large screen, which displays all kinds of useful information. A head-up display is optional for people who always want their information immediately available. Sexy, sleek, easy to read and sporty are the adjectives I’d use.

The exterior of the new A6 is more subtle evolution than revolution. The front is still dominated by the finessed large grille and headlights with LED running lights. The sedan is 4.92 metres long, 1.87 metres wide but just 1.46 metres high, which make for a pretty athletic stance with its sweeping roofline and new pronounced shoulder line. Naturally, the A6 has a significant proportion of aluminium components to keep the weight down.

Under the bonnet is the supercharged 3-litre V6 that puts out 220kW between 5,250 and 6,500 revs. The max torque of 440Nm gets the A6 from 0 to 100 in a sporty 5.5 seconds. The top speed is governed at 250 km/h. Compared with the supercharged V6 in the previous-generation A6, this engine is more efficient (a frugal 10.8 litres city/highway combined), owing to an electric power-steering pump and a new oil pump.

So far so good, but now it was time to drive it. I started the A6 with the start/stop button on the centre console and hit the road. After a few kilometres I concluded that I’ve driven cars with softer suspension, but the A6 gets the balance right between too soft or hard. The engine builds torque evenly, rapidly and emits a pleasant, sonorous sound that is fairly sporty for a luxury sedan yet unobtrusive enough not to scare away any buyers. There’s no turbo-lag to speak of but there is a micro-second delay when you ram down the accelerator, which is due to the 7-speed S tronic jumping down a few gears as I later discovered. The S tronic itself is so smooth that there’s really nothing to indicate that gears are changing under normal driving except for the readout on the instrument screen.

Cornering is also extremely flat and solid. Previous A6s had a reputation for understeering, but now you have to push it really hard into curve to detect it. That’s due to the fact that the A6’s modular longitudinal platform places the front axle farther forward than in the old, nose-heavy A6s, making for far better weight distribution. The latest version of Quattro, with a nominal front-to-rear power distribution of 40/60 per cent, naturally helps as well. The net result is that the A6 is extremely nimble through curves and feels far smaller than it actually is. The only critique I can come up with is that the new electromechanical power steering lacks some feeling. This is apparently a common fault with electric setups, which for all their lightness and power saving gains can’t quite simulate realistic loading of the tyres.

On the highway the A6 cruises effortlessly, comfortably and quietly thanks to the best noise suppression in its class. The car is naturally packed with technological gizmos to keep you safe, so there’s plenty of time to play with Audi’s drive select package, which lets you choose between efficiency, comfort, dynamic and auto settings for the steering, gearbox and throttle response. If you go for the optional air suspension you can fiddle with that as well.

All in all, the A6 looks good, feels good and offers everything you need in a luxury sedan. Plus it will make you feel good as it is the greenest vehicle in its class. Or put it another way, the A6 3.0 TFSI starts at $63,705 and serves up a lot for your money.