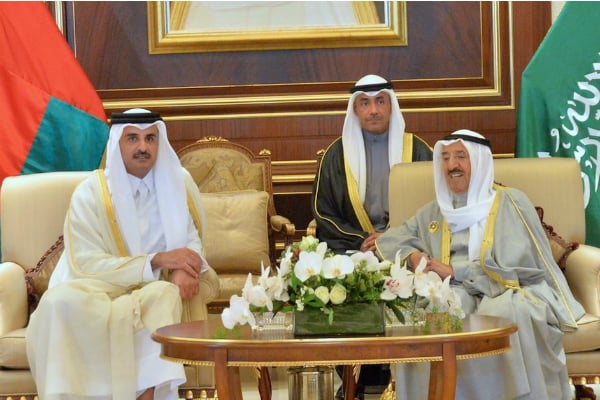 The Emir of Qatar, Sheikh Tamim bin Hamad Al-Thani, has been pictured at this week’s Gulf Cooperation Summit in Kuwait after arriving with a delegation.

The Qatari ruler’s plans to attend were first announced on Sunday and led to speculation that the country may be ready to resolve a rift with fellow council members Saudi Arabia, Bahrain and the UAE.

The three countries and Egypt closed economic and diplomatic ties with Qatar on June 5 after accusing it of supporting terrorism.

There was speculation that the 38th edition of the summit would be postponed until the rift, which has seen air land and sea links between the two sides closed, had been resolved.

On Monday, Kuwait’s foreign minister Sheikh Sabah Al Khaled told a gathering of GCC ministers that the dispute should be addressed at the two-day summit on Tuesday and Wednesday even if it was not resolved.

Sources told UAE publication The National that Sheikh Sabah suggested the meeting should be used to lay the groundwork for a possible resolution, warning the integrity of the GCC should not be compromised.

The first session of the summit will be held at Bayan Palace at 5.30pm and will be followed by an official dinner hosted by Kuwait’s Emir.

On Wednesday regional leaders and ministers are expected to convene for a second closed session at 11:30am.

It was unclear who would be representing Saudi Arabia, the UAE and Bahrain at the meetings.

Oman’s deputy prime minister Sayyid Fahd bin Mahmoud also arrived in Kuwait City to take part in the sessions, which normally would be attended by heads of state.

UAE state news agency WAM reported this week that the country’s President Sheikh Khalifa bin Zayed al-Nahyan was seeking the formation of a “joint cooperation committee” with Saudi Arabia on economic, political and military issues in a move that could cast a shadow over the meetings.