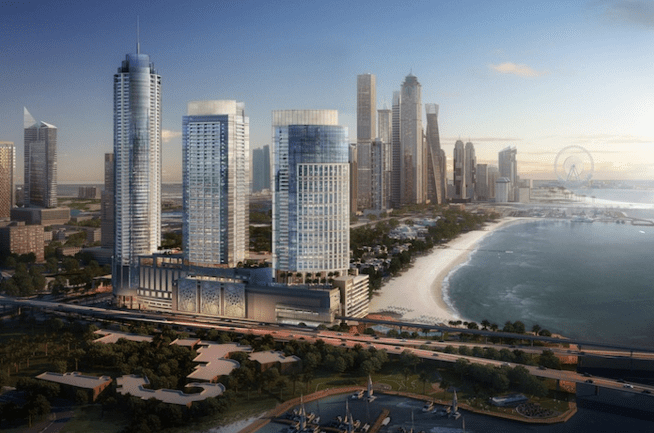 Dubai developer Nakheel has awarded a construction contract worth nearly Dhs 1.4bn for its new three-tower project in Palm Jumeirah.

Work is expected to begin in Q1 2016 and will take just over two years to complete, a statement said.

The Palm Gateway includes 1,265 luxury homes across three high-rise buildings – the tallest topping 285 metres – to be constructed on top of the existing Palm Monorail terminal.

Apartments range from one to three bedrooms and will be available on lease.

Spread across 5.5 million square feet gross floor area, the waterfront complex will have retail, dining and health and fitness facilities. It will feature almost 4,000 parking spaces.

Located at the entrance to Palm Jumeirah, the development will also have its own beach club and park – a shaded, landscaped complex with waterfront dining and shopping options, pool, barbecue areas and a jogging track.

The Palm Monorail will remain operational throughout the construction of the project, the statement added.

Originally launched in 2008, the Palm Gateway project was scheduled to be completed in 2011. But it was shelved after the property crash and relaunched in 2014.

Nakheel is currently growing its residential leasing portfolio, which is set to increase to more than 20,000 units, with other new developments coming to Palm Jumeirah, Warsan Village, Jebel Ali, Dragon City and Nad Al Sheba.

Earlier this week, the company also opened its first hotel – ibis Styles – at its Dragon Mart complex. The 251-room hotel is the first of 10 expected to be built by the company in the next few years.