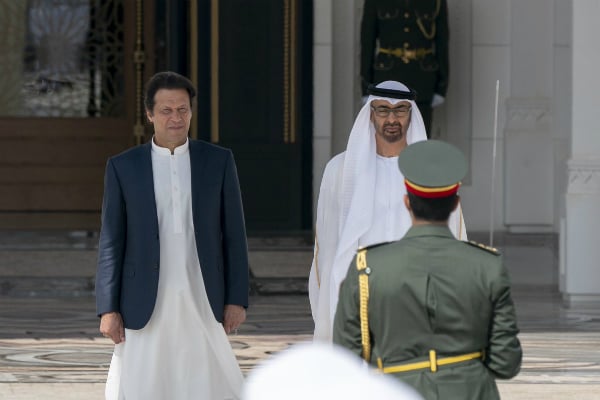 Pakistan’s prime minister arrived in the the UAE on Sunday as the country continues to seek financial assistance from its allies.

Saudi Arabia offered a $6bn rescue package to Pakistan last month including $3bn in foreign currency support for a year and a further loan worth up to $3bn in deferred payments for oil imports to help stave off a current account crisis.

Prime Minister Imran Khan also visited China earlier this month and said on Friday the Asian superpower had promised a “big” package of aid but declined to disclose figures, according to local reports.

Gulf News cited a top official at Pakistan’s Ministry of Information as confirming Khan’s visit to Abu Dhabi on Sunday to meet leaders as he seeks further financial guarantees to counter a tough line by the International Monetary Fund (IMF).

Pakistan’s foreign minister Shah Mahmood Qureshi also held a meeting with his UAE counterpart on the sidelines of the 9th Sir Bani Yas Forum in Abu Dhabi on Saturday, according to the publication.

UAE foreign minister Sheikh Abdullah Bin Zayed Al Nahyan is also understood to have travelled to Pakistan earlier this month as part of the talks.

He was shown attending an official reception at the Presidential Palace in Abu Dhabi where the two discussed areas of cooperation and regional issues, according to state news agency WAM.

Qureshi has confirmed the country is seeking a similar arrangement to that reached with Saudi Arabia to place it in a better negotiating position with visiting IMF officials.

The country is seeking an IMF bailout programme that could be worth up to $15bn.