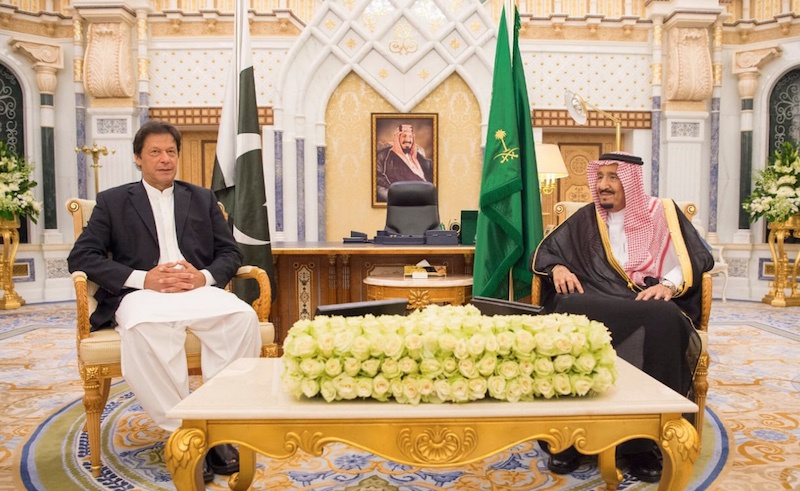 Saudi Arabia has agreed to give Pakistan $3bn in foreign currency support for a year and a further loan worth up to $3bn in deferred payments for oil imports to help stave off a current account crisis, Pakistan’s government said on Tuesday.

The $6bn total exceeds forecasts by analysts and will likely reduce the size of any bailout Pakistan it receives from the International Monetary Fund (IMF), with whom it is currently engaged in talks on a rescue package.

The Saudi agreement came as new Pakistani Prime Minister Imran Khan attended a Saudi investment conference that has been boycotted by several other leaders over the death of a dissident Saudi writer at the country’s consulate in Istanbul.

Khan had said before departing that his country is “desperate” to shore up its foreign currency reserves, which are at a four-year low, equivalent to less than two months’ imports and barely enough to make its debt repayments through the rest of the year.

Finance minister Asad Umar this month requested talks with the IMF for the country’s second bailout in five years. An IMF team is due to visit Pakistan to open negotiations on Nov. 7.

Khan had however sought to avoid going to the IMF and still wants to at least reduce the size of any bailout by appealing to “friendly countries” for bilateral financial support.

Khan had visited Saudi Arabia last month in his first overseas trip since taking office in August, but that trip failed to produce any significant assistance, despite Pakistani media reports of agreements on deferred oil payments.

“It was agreed Saudi Arabia will place a deposit of $3bn for a period of one year as balance of payment support,” the ministry said in a statement.

“It was also agreed that a one year deferred payment facility for import of oil, up to $3bn, will be provided by Saudi Arabia. This arrangement will be in place for three years, which will be reviewed thereafter.”

Khan is scheduled to visit China next week.

Pakistani officials have been concerned the United States, which has fallen out with Islamabad, will push the IMF to impose harsh conditions on Pakistan as part of any bailout.

Pakistani analysts say reducing the size of the bailout package needed from the IMF would shore up Pakistan’s weak position during negotiations with the fund.