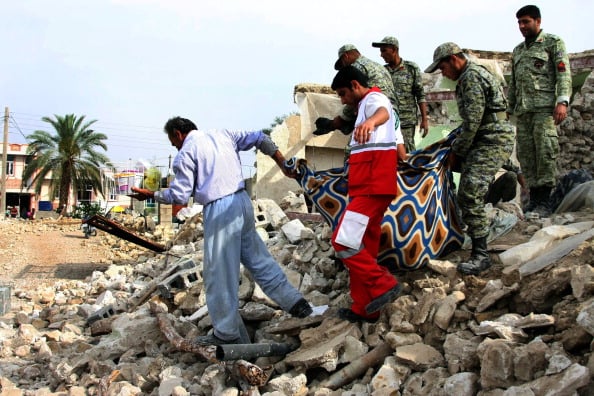 A powerful earthquake struck a border area of southeast Iran on Tuesday killing at least 35 people in neighbouring Pakistan, destroying hundreds of houses and shaking buildings as far away as India and Gulf Arab states.

Communications with the sparsely-populated desert and mountain region were largely cut off, making it difficult to assess Iranian casualties. But an Iranian provincial governor later said there were no reports of deaths there so far.

“Our staff were in a meeting and we felt the ground shake,” Saleh Mangi, Programme Unit Manager for Plan International in the Pakistani town of Thatta, was quoted as saying by the British office of the children’s charity.

“It was horrible – we felt the movement in the chairs and even the cupboards were shaking. This is the strongest quake I have felt since the 1980s.”

Pakistani officials said at least 30 people were killed and 150 injured in the town of Mashkeel in the southwestern Pakistani province of Baluchistan, which borders Iran.

Mohammed Ashraf, head of a health centre in Mashkeel, said several hundred houses in the town had caved in. Three women and two children were also killed when their mud house collapsed in the Baluchistan district of Panjgur.

“The earthquake has killed at least five people in Panjgur,” said Ali Imran, an official at the government disaster-response unit in Quetta, Baluchistan’s main city.

Pakistan’s army said it had deployed troops and helicopters to ferry tents, medicines and medical teams to Mashkeel.

Iran appeared to have emerged relatively unscathed. National media reported that 27 people were injured and that the significant depth was the likely reason for the relatively low level of damage from a 7.8 magnitude quake.

Soon after the quake, an Iranian official told Reuters he expected hundreds of dead and state media quoted unconfirmed reports of 40 fatalities in Iran.

But Hatam Narouyi, governor of Iran’s Sistan and Baluchistan province, said there were “no fatalities”, the student news agency (ISNA) reported.

People in the Iranian city of Zahedan poured into the streets when it struck, Fars news agency reported. Officials in Saravan, the nearest city to the epicentre, said there had been no serious damage.

Iranian Red Crescent official Morteza Moradipour said emergency crews, including dog teams to sniff through the debris for any buried survivors, had reached the area.

“Because of the strength of the earthquake we had expected to see significant damage in residential areas but the quake was at a depth of 95 km and therefore the extent of the damage was on par with earthquakes measuring magnitude 4,” he said.

The U.N.’s Office for Coordination of Humanitarian Affairs (OCHA) said it was in contact with authorities in Iran and “stands ready to assist upon request”, a spokesman said.

It was the second big quake to hit Iran in a week. On April 9, a powerful 6.3 magnitude quake struck close to the Bushehr nuclear power station, killing 37 people, injuring 850 and devastating two villages.

Most of Iran’s nuclear-related facilities are located in central Iran or its west, including Bushehr, its nuclear power plant, which sits on the Gulf coast. Iran says safety standards at Bushehr are good, but some Western experts have their doubts.

“It (the quake epicentre) is far from Bushehr and other nuclear-related facilities,” Iran expert Ali Vaez of the International Crisis Group think-tank said.

“However, the recent tremors are ominous reminders of how earthquake prone Iran’s terrain truly is and how critical it is for the Iranian government to be prepared for a nuclear emergency.”

The International Atomic Energy Agency (IAEA) said Iran’s nuclear authority had informed it that there was no damage to the Bushehr power plant or other facilities.

Iran sits on major geological faultlines and has suffered several devastating earthquakes, including a 6.6 magnitude quake in 2003 that flattened the city of Bam, in Iran’s far southeast, killing more than 25,000 people.

“I was working and my work station was shaking,” said Viidhu Sekhri, 35, an underwriter at a New Delhi insurance company. “Then it was a bit shaky so we just rushed outside.”A