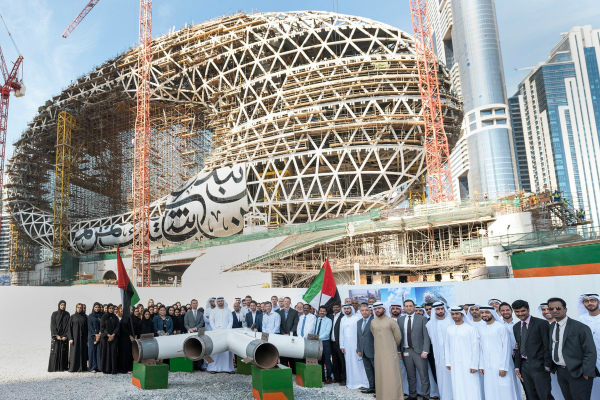 Authorities in Dubai have pushed back the opening of a futuristic museum project near Emirates Towers until 2020, it has been confirmed.

The Museum of the Future was originally due to open last year after being unveiled in 2015.

Dubai Future Foundation (DFF) confirmed in May that the opening of the project, which is being funded by a Dhs10 ($2.72) fee charged by certain government institutions on each transaction, would be pushed back until 2019.

However, in a further update announcing the completion of the super structure on Monday, the organisation said a 2020 opening was now expected.

“The museum will provide visitors the opportunity to experience the future now. It will be the destination for scientists, experts, innovators, and creative minds, from all over the world, to design and shape the future,” said minister of cabinet affairs and the future and vice chairman and managing director of Dubai Future Foundation Mohammed Abdullah Al Gergawi.

Earlier this year, government authorities said they were inviting start-ups for an accelerator programme to design key exhibits in the museum.

Fifteen companies were to be invited to demonstrate their technology, develop pilot project proposals and compete for funded projects to be integrated into the attraction when it opens.

DDF said on Monday the project would “be an icon of the future of science, technology and innovation” and “strengthen Dubai’s position in the coming few years as a global hub for future and emerging technologies”.

It is described as one of the most advanced buildings in the world and features a unique design with Arabic calligraphy on its exterior.