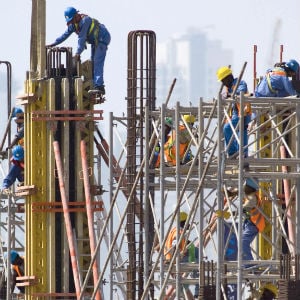 Indian contract workers coming to the UAE will now have to go through a process of electronic contract registration and a validation system before they can begin work in the country, reports official news agency WAM.

A new protocol, signed by the UAE’s ministry of labour and India’s ministry of overseas Indian affairs, requires the informed consent of the worker, the employer and the Indian authorities of the full terms of the work contract before the worker’s deployment to the UAE, said the report.

The terms of the e-contract are then put into a document that is later signed by the worker and employer in the UAE, and registered with the ministry of labour.

The new system will ensure full transparency of the contracting process, said Saqr Ghobash, the UAE Minister of Labour, as the prospective worker will know the scope of remuneration, the benefits and the employment conditions before coming to the UAE.

He added that that it would protect the interests of both workers and employers under the UAE Labour Law.

According to the new system, when an employer in the UAE submits an online application with the labour ministry requesting a work permit, he will also need to disclose the terms of the employment offer. The ministry will then process the application and provide the electronic record to government-accredited recruitment agencies in India, who then need to obtain the worker’s attested consent. A designated Indian government agency will also review the employment terms before granting an emigration clearance. This is followed by the registration of the electronic contract and the issuance of the work permit by the UAE ministry of labour.

India is currently implementing an e-governance system to make the process of overseas deployment of Indian workers “transparent and accessible to all stakeholders,” said Vayalar Ravi, Indian Minister of Overseas Indian Affairs in the UAE. The new contract registration and validation system is aligned with India’s e-governance system, he added.