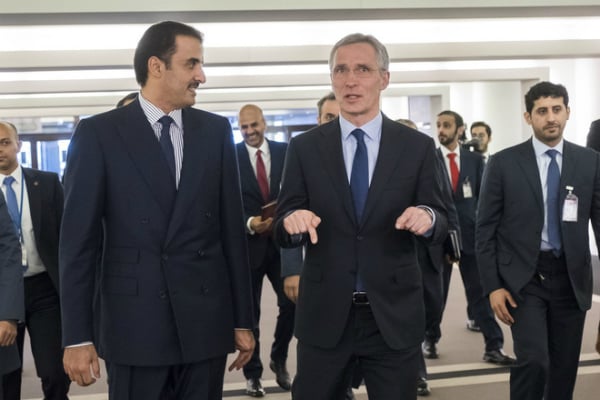 On Tuesday, Qatar’s defence minister said the country had a long-term strategic “ambition” to join NATO, according to AFP.

However, an official of the 29-country alliance told the news service that this would not be possible under the group’s current regulation.

“According to Article 10 of the Washington Treaty, only European countries can become members of NATO,” the official was quoted as saying. “Qatar is a valuable and longstanding partner of NATO.”

Qatar is a member of NATO’s Istanbul Cooperation Initiative, which was launched in 2004 to promote political dialogue and cooperation between the organisation and the Gulf countries.

But it has been at odds with two of the three other ICI members over the last year under a regional rift.

Bahrain and the UAE joined Saudi Arabia and Egypt in severing diplomatic, trade and transport links with Qatar last year over its alleged support of terrorist groups.

Kuwait is the only Gulf member of the ICI not to take sides in the dispute.

Qatari defence minister Khalid bin Mohamed Al-Attiyah said in the ministry’s official magazine on Tuesday that the country had become “one of the most important countries in the region in terms of the quality of armament”, according to AFP.

“Regarding the membership, we are a main ally from outside NATO… The ambition is full membership if our partnership with NATO develops and our vision is clear,” he was quoted as saying.

The minister’s comments came after Qatar’s Emir Sheikh Tamim Bin Hamad Al-Thani visited NATO headquarters in March to sign a deal allowing NATO forces and personnel to enter and transit Qatar and use the Al-Udeid Air Base, which houses 10,000 US military personnel and acts as a base for air operations in the Middle East.

There was little sign of the Qatar rift ending this week, with Tuesday marking the one-year anniversary since it began.

Ahead of the milestone, Qatar enacted a boycott on goods from the UAE, Saudi Arabia, Bahrain and Egypt amid wider signs of the row deepening.

This week there were also reports of squabbles over World Cup broadcasting rights between Qatar’s Al Jazeera, which the four countries want closed as part of their conditions to end the rift, and operators in the UAE and Saudi Arabia

Qatar responded to the report by accusing Saudi Arabia of “reckless behaviour” and creating “a disturbance in the region”.