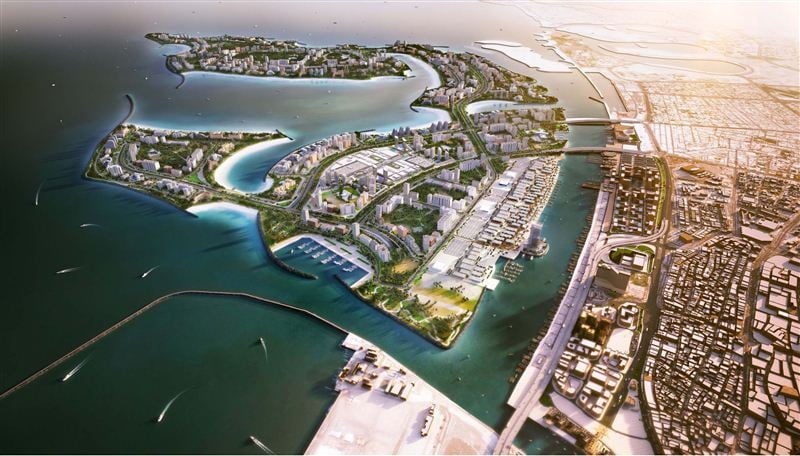 A separate construction tender will be released in Q2 2017.

Deira Islands Boulevard spans an area of 9 million square feet with 2,600 one-, two- and three-bedroom apartments and 256 townhouses across four clusters.

Each cluster will include a swimming pool, recreational facilities and a retail podium of shops and restaurants, with 1.7 million square feet of green communal parkland and sports and wellbeing facilities across the site.

The units will be available for lease rather than sale, with the developer planning to double its existing number of units for rental purposes to nearly 36,000 through other projects in Jebel Ali, Nad Al Sheba, Palm Jumeirah and Jumeirah Heights.

Nakheel said the development would surround the nearby Deira Mall with its 20 towers, offering a combined 2,900 apartments and townhouses for lease and around 1,000 hotel rooms and serviced apartments.

The company’s chairman Ali Rashid Lootah said: “Deira Islands Boulevard will be the defining landmark of the area traditionally known as ‘Old Dubai’, offering spectacular facilities in a self-sustaining community for more than 10,000 people. The project is one of a whole range of world-class attractions that we are creating at Deira Islands, which is set to become the new destination of choice for living, tourism and recreation.”

Under diversification plans, Nakheel is looking to boost its hotel room footprint with 5,200 in the operation, under construction and design stages and is also engaging in a Dhs16bn retail expansion.

Last month, the developer said work had begun on a Dhs900m beachfront resort on Deira Islands in collaboration with Spain’s RIU Hotels and Resorts.

The Deira Islands project replaced Nakheel’s plans for a larger Palm island at the site, announced in 2004. The original project was expected to cost Dhs11bn ($2.99bn) and contain up to 8,000 villas.